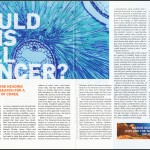 Why scientists are heading underwater to search for a new generation of cures.”

When Hendrik Luesch invited me to Florida to go snorkeling, I didn’t expect to be wading through brackish muck in the Indian River Lagoon, a 156-mile-long estuary. I’m traveling aboard a 21-foot fishing boat with Luesch, a 40-year-old associate professor of medicinal chemistry at the University of Florida in Gainesville. The visibility sucks, like swimming through a vat of kombucha. Luesch drags his fingers through the water, gathering a wad of flotsam. He raises the specimen into the sunlight to get a better look at the slime, known as cyanobacteria.

Cyanobacteria live in every ocean and on every continent in both salt and fresh water. One species causes a rash known as swimmer’s itch; another blooms in lakes and reservoirs, expelling a neurotoxin that can be fatal to humans. “They produce this huge diversity of compounds that have never been identified,” says Luesch, who’s been studying them since 1997. Luesch has investigated cyanobacteria from around the world—Hawaii, Florida, Guam, Palau—and last year he made a startling discovery: a family of cyanobacteria called Symploca emits a toxin that attacks tumors. Luesch sprinkled Symploca extract on cultures of colon, bone, and breast-cancer cells, and they withered within hours, as though they’d been doused with Roundup; he did the same with healthy cells, and they survived virtually unscathed. Luesch christened the new compound “largazole” (the first batch came from algae near Key Largo), and has recently completed animal testing: in mice, largazole slowed the growth of cancerous colorectal tumors. He hopes to have an FDA-approved treatment on the market in about 10 years—the typical timeline to develop a new drug. END_OF_DOCUMENT_TOKEN_TO_BE_REPLACED 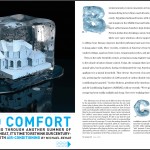 After suffering through another summer of record-breaking heat, it’s time to rethink our century-old love affair with air-conditioning.

Before modern cooling machines enveloped civilization in frigid air, humans living in hot climes used all sorts of techniques to stay reasonably comfy. Egyptians fashioned homes with mud and stone. Domed mosques and temples in the Middle East and India funneled hot air upward. Dwelling in subterranean chambers kept denizens of Cappadocia in Turkey and Petra in Jordan from breaking a sweat. Some cultures draped water-soaked fabric over open windows; others topped their roofs with thatch or earth to diffuse heat. Roman emperors had their plebeians haul snow from distant mountaintops and pile it along palace walls. More recently, residents of America’s Deep South kept their homes airy with vaulted ceilings, spacious front rooms, wraparound porches, and picture windows.

Then, in the early twentieth century, a tenacious young engineer named Willis Carrier introduced us to the miracle of indoor climate control. Today, the company that Carrier founded earns $11.4 billion in annual sales, but its products, having revolutionized the way Americans live, remain the least efficient appliances in a typical household. They devour 16 percent of an average household’s annual energy tab, producing the equivalent of 2,290 pounds of carbon dioxide emissions. “We’ve always taken air-conditioning for granted,” Gordon Holness, president of the American Society of Heating, Refrigerating, and Air-Conditioning Engineers (ASHRAE), told me recently. “We’ve got into these lazy patterns because energy has been readily available and cheap. Now we’re realizing there isn’t an endless supply.” END_OF_DOCUMENT_TOKEN_TO_BE_REPLACED 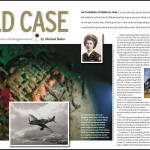 A new team sets out to solve old disappearances.

On Thursday, October 26, 1944, 12-year-old Frank Jacobs did what he always did when school got out: He walked a half-mile to the Manhattan Beach pier, where he liked to fish for halibut. Jacobs settled in a spot on the pier’s north side, which gave him a view of aircraft departing from Mines Field (now Los Angeles International Airport), about three and a half miles south. He loved catching a glimpse of an American fighter.

Airplanes departing Mines usually head west, over the bay. And that autumn afternoon was no different: Jacobs noticed the roar of a single-engine airplane climbing over the water. Though the boy built balsawood models of aircraft used in World War II, he could not identify this airplane. But he suspected it was a P-51 Mustang. END_OF_DOCUMENT_TOKEN_TO_BE_REPLACED 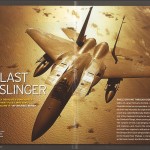 The F-15C is the only dedicated dogfighter left in the U.S. military fleet. Why isn’t the Air Force replacing it?

While driving through downtown Mountain Home, Idaho, on a gray February morning, I notice something troubling: Mountain Home has no mountains. Later I learn why. In the 1880s, the town was relocated. Its original site was an Overton trail stagecoach stop called Rattlesnake Station. A post office, a farmhouse, and a few clapboard structures were nestled in the foothills of the Sawtooth Range, where snowy peaks soar above 10,000 feet. The outpost served a gunslinging clientele of trappers, miners, and explorers, and, true to the romance of the American west, survival there required a will and an ability to fight. But in 1883, the Oregon Short Line railroad laid tracks seven miles southeast, on the Snake River Plateau. A more comfortable life beckoned, so the town moved. And that’s when Mountain Home lost its soul.

Its rebirth began in August 1943, when the U.S. Army Air Forces built an airfield on the outskirts of town to train B-24 Liberator crews. Soon the base expanded, until it encompassed 134,000 acres. In 1991, the F-15 Eagles arrived. Built by McDonnell Douglas (now Boeing), the F-15 made its first flight on July 27, 1972, and the C model remains the only fighter in the U.S. arsenal designed exclusively for air-to-air combat. Its pilots have restored to Mountain Home the sensibility of the gunslinger, whose singular pursuit leaves no safety net: It’s kill or be killed. END_OF_DOCUMENT_TOKEN_TO_BE_REPLACED 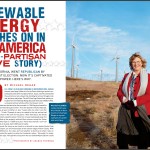 On a crisp, cloudless morning in November 2002, Susan Hansen stood atop California’s Cache Peak clutching a satchel containing the ashes of her husband, Homer. Susan, now 75, had reached the summit on a rock-strewn trail, climbing for an hour through scrub oak, bull pine, and juniper. The 6,676-foot-high Cache Peak, which protrudes from the Tehachapi Range about 40 miles east of Bakersfield, is situated almost wholly within the Hansen ranch.

Susan’s in-laws are also buried on the mountain. In 1946 they purchased the property—more than 50 square miles—from the Southern Pacific Railroad. “The first one up was my father-in-law,” Susan tells me when I visit her in December. “It took 12 people to carry his casket to the top, and we had to dynamite a hole in the rock for the grave.” After that fiasco, the family decided cremation would be easier. Once her in-laws had passed away, the Hansens divided up the property and sold their shares, except for Susan and Homer, who kept an 11,000-acre plot. There they started a cow-calf operation that at its peak had 1,000 head of cattle. END_OF_DOCUMENT_TOKEN_TO_BE_REPLACED 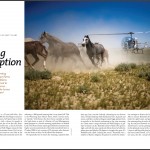 The Mustang Redemption: Dangerous felons are being trained to tame wild horses. But can the horses tame the men? Download PDF

George Reynolds is a 53-year-old felon. Sentenced in July 2008 for third-degree sexual assault against a minor, he’ll spend up to twelve years in prison, with a chance for parole in four. Standing just shy of six feet tall, Reynolds has blunt shoulders, powerful arms, a shock of brown hair, icy blue eyes, and a bushy Hulk Hogan mustache that frames his chin and creates a permanent frown. He’s an imposing figure, a guy you’d never want to cross. But at the moment, Reynolds looks terrified and minuscule next to his adversary, a 900-pound mustang that is very pissed off. This is the Wyoming State Honor Farm, where convicts train, or “gentle,” wild horses that have been rounded up from the high plains as part of a Bureau of Land Management (BLM) program to control mustang populations on federal lands. The Honor Farm admits good-behavior inmates from higher security penitentiaries. Reynolds transferred here in October 2008 to join a group of 25 prisoners who domesticate the horses so they can be offered for adoption. END_OF_DOCUMENT_TOKEN_TO_BE_REPLACED