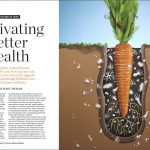 Just as you have a microbiome, the soil beneath your feet has one too. And promising new research suggests it may have a surprising influence on food and human wellness.

It’s late December in Boulder, Colorado, and I’m on the University of Colorado campus walking toward the Cooperative Institute for Research in Environmental Sciences (CIRES) lab. The native flora here is dormant, in a deep winter slumber, rendering the landscape in monochromatic tans. Almost nothing is growing outdoors. END_OF_DOCUMENT_TOKEN_TO_BE_REPLACED 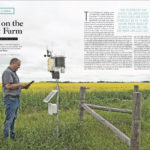 Trevor Scherman is getting more rest these days, thanks to his iPad. Scherman is a farmer who grows wheat, peas, canola and lentils near Battleford, Saskatchewan. Like legions of farmers in both Canada and the United States, he uses precision agriculture technology—cutting-edge tools like drones and satellite imagery—to keep a careful watch on his crops. The sensors positioned around Scherman’s farm provide instant feedback on all sorts of conditions that could impact his crops, such as heavy rain or a sudden frost. He also gets digital satellite images of his fields delivered by email. A company called Farmers Edge analyzes the data with sophisticated mathematical algorithms and artificial intelligence (AI). In addition to identifying major issues, the software can even pinpoint a minor weed outbreak or a few acres where plants are withering, problems that large-scale farmers like Scherman likely would have never discovered on their own until they were rampant. END_OF_DOCUMENT_TOKEN_TO_BE_REPLACED