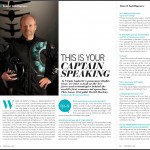 As Virgin Galactic’s passenger flights near, we take a look at the key faces and technologies behind the world’s first commercial spaceline.

When he wants to relax, David Mackay, 55, flies an Extra 300L, a performance aerobatic aircraft, doing vertical rolls and knife-edge spins. This helps him stay sharp at his day job: chief pilot for Virgin Galactic. At the moment, Mackay is flight-testing WhiteKnightTwo and SpaceShipTwo—the mother ship that will shuttle tourists to 47,000 feet, and the rocket plane that will decouple there and blast into sub-orbital space—and is scheduled to begin flying tourists to space next year. The Scotland native made his first flight in 1977. “I did it with the University Air Squadron, which gave students experience with the armed forces,” he recalls. After graduating, Mackay joined the Royal Air Force (RAF), flying a Hawker Harrier GR3, a fighter known for its unique ability to take off and land vertically. “I always wanted to be a test pilot,” he says. “So as soon as I had sufficient experience, I applied to test pilot school.” He remained in the RAF as a test pilot until 1995, when he left to fly for Virgin Atlantic, and then, in 2009, joined Virgin Galactic to become the world’s first commercial spacecraft pilot.

What inspired you to become a test pilot?
“From an early age, I was interested in the possibility. I lived in a part of Scotland where I saw low-flying military jets. It looked really exciting. I was also inspired by manned spaceflight—the first astronauts were ex-military test pilots. That seemed to me like a fantastic career path.”

How did you land your job at Virgin Galactic?
“I was a pilot for Virgin, flying A340s, when I got the invitation to look at technical documentation for Virgin Atlantic’s GlobalFlyer, built by Scaled Composites for Steve Fossett to fly solo, nonstop around the world. On the basis of what I reported, I was asked to come to Mojave [California, where Scaled is based] to talk to the engineers. At the time, they were building SpaceShipOne, and I flew its simulator. When Virgin Galactic embarked on its SpaceShipTwo project, I was asked to be the test pilot.”

Isn’t testing aircraft a risky?way to earn a living?
“That’s the popular impression. Test flying was dangerous in days gone by, back in aviation’s early years. But today you can’t afford to damage or crash an aircraft. Now it’s all about taking small steps. It’s a careful, controlled approach.”

Do test flights give you an adrenaline rush? Or is it business as usual?
“It’s somewhere in between. Flying can be very unforgiving. You should really know your aircraft, its limitations, and its systems. Do this and you shouldn’t get a big adrenaline rush. That said, there are some flights where the adrenaline flows.”

Such as?
“I once flew an aircraft where the main gear did not lower properly. I was stuck with just the nose gear and one of the main gears down. It was a training flight. We ended up landing on two wheels, which made for quite an exciting ride as the aircraft slid off the side of the runway. That’s the only accident I’ve ever had—I felt the adrenaline after we came to a stop.”

Tell us about your test flights?for Virgin Galactic.
“I’ve done a glide flight in SpaceShipTwo and about 15 flights in WhiteKnightTwo.”

Is WhiteKnightTwo hard to fly?
“It’s a large airplane with a 140-foot wing-span [about the size of a narrow-body commercial jet], and it’s equipped with a manual flight-control system—literally just cables and rods maneuvering it. That’s quite unusual for an aircraft of this size. But because it’s manually controlled, you can feel its natural characteristics. There’s no fly-by-wire system to hide those, which makes it a satisfying aircraft to fly—full of character and not bland or boring.”

How has WhiteKnightTwo broken ground that might be useful to commercial aviation?
“Its configuration—the twin fuselage—allows you to carry a very large and heavy payload mounted externally. This could be a spaceship or a rocket or anything else you might want to have sitting outside an aircraft.

About the two fuselages: What’s in them?
“The pilot sits in the right fuselage. For now, the left one is empty. But you could bring in seats and air-conditioning for passengers.”

Why steer from the right side? Is this a British thing?
“Yes, it’s why they needed a British pilot—I’m joking. There were many considerations, but conventionally the captain in a two-crew aircraft sits in the left-hand seat and the copilot sits on the right. Flying from the right fuselage gives WhiteKnightTwo’s captain a good view of the spaceship.”

When you piloted SpaceShipTwo, what was it like decoupling from the mother ship? “A little like you’ve gone over the top of a roller coaster. It lasts for a couple of seconds and then almost immediately you’re flying a glider. It’s pleasantly surprising how well it flies—quite a sweet-handling airplane.”