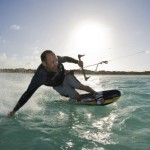 In North Carolina and across the country, older adventurers are going crazy for kiteboarding: a fun and waaay-fast watersport.

I’m kiteboarding with Mary Hammond-Tooke across Pamlico Sound, a 300-square-mile estuary of waist-deep water ringed by North Carolina’s Outer Banks. Mary, a 63-year-old former midwife, is attached to a behemoth blue-and-white parabolic kite, dwarfing her with its 25-foot wingspan. Her technique is careful and deliberate: one errant maneuver and the kite could slingshot her airborne or plow her into the water. But Mary fearlessly dips her steering-control bar and the 100-foot kite lines snap taut, sending the nylon sail into a power dive that catapults her downwind. She leans back and throws her weight into her hips, edging her board and carving a deep upwind tack that ejects a foamy white rooster tail. Now she’s slicing through the balmy water with ballerina precision at close to 30 miles per hour—startlingly fast for a relative beginner who has been kiteboarding for only about a year.

“I love the speed, the thrill of moving with the wind,” says Mary, lean and limber, with the body of a long-distance runner. “It makes me feel alive.” After 20 minutes of riding, as we zoom across the sound, I finally get close enough to see her irrepressible grin—the adrenaline surge is working its magic. The kiteboarding rush is instant and intense, a giddy high that lubricates muscles and masks fatigue. I’ve kited five-hour sessions and hardly felt tired (though there’s a morning-after effect strangely akin to a hangover).

I’ve come to North Carolina to learn why the over-50 set is embracing kiteboarding faster than any other watersport in history. Kiteboarding was born on Maui nearly ten years ago; by some estimates there are already 300,000 riders worldwide. Despite its burgeoning size, the community remains a close-knit clan that welcomes newcomers—and a big chunk of them are thrill-seeking older Americans. One morning in the Outer Banks, I head out for a sunrise session and meet John Lauby, 64, rigging up on the beach. A veterinarian from Fayetteville, North Carolina, he’s a regular weekender in the Outer Banks. Later I kite with Susan Righter, 68, an Outer Banks artist and grandmother of eight. In Dewey Beach, Delaware, a favorite kiting spot for those in the Beltway burbs, I’ve ridden with a former Air Force flight engineer, Walt McCann, 75, and with Janie and Warren Fuller, both 63 and retired from the National Security Agency. Warren, who flew recon in Vietnam and earned a Distinguished Flying Cross (his chopper had been shot down three times), logs his kite sessions into an Excel spreadsheet. In early September he’d clocked 344 hours of riding time, and he aims to surpass 500 by year-end. In Santa Barbara, California, Jerry Shalhoob, 65, who founded a successful wholesale meat company, kites whenever it blows. I reach him on his cell phone as he’s driving an RV down the Oregon coast, kiteboarding along the way. “Any time there’s wind, I’m on the water,” he says.

Many of these older riders are consummate beach bums, with seawater for blood. “I grew up in California, and I’ve been wet my whole life,” says Mary. “I learned to surf in eighth grade. I swam. I water-skied. I just love the water.” Others are ex-windsurfers who discovered kiteboarding is quicker to master and easier on the body.

“Kiting is something you can learn in a day,” says Warren. “Windsurfing is a long, arduous chore that can take years to perfect. The equipment is too heavy, and I’m not in as much control as when I kite.” Warren, though enthusiastic, makes the short-but-steep learning process sound a bit too simple. “Learning can be pretty rough early on,” Mary had told me earlier, while we rigged our kites on a grassy field, smack in the middle of this gangly 130-mile-long string of barrier islands. “You get pulled hard, dragged through the water or down the beach, bruised and scraped, and there’s no good way to get around that.” Yet after just a few lessons (and some wrenching wipeouts), Mary stayed upright long enough to catch her first rides. A big attraction is the workout. For core, legs, butt, and back, it does in an afternoon what would take a week to accomplish in the gym. “It keeps you in great shape,” says Janie. “And I’m normally a real slug.”

It’s hard to imagine a self-described exercise slug wrestling one of these massive kites and winning. But the ingenious rigging systems on today’s four-line kites have made it easier on the arms (kiteboarding demands less brute strength than water-skiing). Riders clip the primary two “power” lines of the kite into a harness that transfers force to their hips, back, and legs. This puts the rider at the fulcrum point between the kite and the board, allowing him or her to enlist the entire body as a kind of cantilever to temper the pull and regulate speed. The remaining two “steering” lines, which run directly from the control bar to the kite, require only a light nudge to initiate a turn. “You need a little upper-body strength,” says Janie. “But not as much as you’d think. Once you’re hooked into your harness, you can relax and just ride.”

It wasn’t always this easy—or safe. In the early days, if you were hit with a too-hard-to-handle gust of wind, you had to either hold on to the bar—a risky endeavor that could loft you into the treetops—or release the kite (and say goodbye to it forever). But everything changed in July 2005, when a Maui-based company called Cabrinha radically redesigned the kite and bar rigging. Riders could now remain hooked to the kite but kill its power by just letting go of the bar.

Safety advances aside, it’s hard to escape a few nasty butt-kickings. “One of my first big mistakes was that, with one hand, I lost my grip on the bar, and nobody had told me to let go with the other hand to depower the kite,” recalls Mary. Her kite corkscrewed wildly, gathering speed and power with each loop. The force repeatedly lifted her a few feet into the air and then slammed her into the water, as if she were a human tea bag being steeped by an invisible giant (riders actually refer to this as getting tea-bagged).

“People always ask me, ‘Aren’t you a grandmother? Do you think this is safe?’ ” says Mary. “I don’t think I’m taking any kind of a risk. Today’s state-of-the-art equipment makes everything easier and safer. You get more satisfaction and less heartache.

The sky is a deep blue when I join Mary for a four-mile ride from her house on the sound to a secluded sandy beach known to locals as The Washout. After a few minutes on the water, I’m lagging behind. I crank my kite into figure eights to generate forward thrust. It’s futile. This is Mary’s turf, and she’s hauling ass. Because Pamlico Sound is so shallow—in places, only inches deep—much of it remains smooth, even in high wind.

Few places are as well suited to kiteboarding as OBX—the parochial shorthand for the Outer Banks—making the area legendary among riders worldwide. Late one afternoon I count 47 kites in the air at just one of a dozen potential launch sites. An impromptu beach poll turns up riders from Brazil, Peru, France, Hungary, and Bulgaria. Enthusiasts flock to the Outer Banks during the summer like powder buffs to Vail’s back bowls. The reason is geography: look at a map of the eastern seaboard and you can spot the unmistakable silhouette of the Outer Banks jutting into the Atlantic Ocean like the protruding nose of a curious hound. With no significant landmasses to impede incoming weather, the sand-dune-crested islands are buffeted year-round with steady, robust winds.

But you don’t need a coast to be a kiteboarder. I live in Colorado, where the kiteboarding scene has exploded on nearby Lake McConaughy—a 20-mile-long reservoir in western Nebraska, fringed with sandy beaches and pounded by angry Plains winds (there’s even a school called The Kite Ranch, run by Bob Stalker, 50, and his wife, Billie). My wife and I started kiteboarding in 2003, and we’ve hauled our gear from coast to coast, to the Caribbean, South America, Hawaii, and Mexico, meeting riders at every stop. Besides frequenting the obvious locales (California, Florida), kiters are riding in Alaska, Wyoming, Utah, Michigan, Kansas, Oklahoma, Texas, Georgia, and Ohio. Anywhere there is water and wind, there is kiteboarding.

When I return to The Washout in the morning, it’s blowing a steady 20 knots, gusting even higher. A nearby cold front has pumped up the wind across the Outer Banks. Wisps of sand swirl around my ankles. I glimpse Susan Righter about 50 yards offshore. She’s easy to spot—petite, deeply bronzed, strikingly muscular. This is her first year kiting, yet she has already conquered the fear factor that can hamstring beginners. Controlling a kite is like flying an F-18 fighter jet: it’s frighteningly powerful and finger-touch sensitive. Novices often overcompensate and get walloped. Despite Susan’s skill level, I’m surprised to see her on a nine-meter kite, which is whopping for someone her size. In high winds you want your smallest kite in case things get hairy, and Susan is clearly struggling. Whenever a gnarly gust barrels ashore, she quickly pushes her control bar away to flatten the kite and shed power. But the wind is too strong, and after a few minutes she zips back to the beach. She looks a bit shell-shocked. “I definitely need a smaller kite,” she confides. It’s blowing harder now, and I tell her I’m impressed with her kiting prowess.

“My grandchildren watch and say, ‘Wow, look what Granny is doing!’ and my friends think I’m crazy. But if you’re active at my age, you need a sport like this,” says Susan. “Otherwise, what else are you going to do?”

Posted in Articles and tagged with AARP Magazine. RSS 2.0 feed.