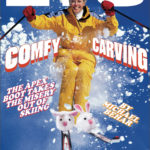 The Apex book takes the misery out of skiing

One winter morning in 2008, Scott Lippman was driving to Taos Ski Valley in New Mexico. He should have been giddy—a storm had dropped fresh powder overnight. But he wasn’t. “On every run, I knew I’d have to stop halfway down and unbuckle my boots, because I couldn’t feel my toes,” says Lippman, 48, an inventory liquidator who lives in Santa Fe and often skis with his wife and 16-year-old twin daughters. He’d recently dropped $500 for footbed heaters and custom insoles and hired a professional fitter to stretch and grind his plastic shells into submission. None of it made the boots tolerable. After the trip, he considered quitting the sport for good. But first he did some Googling.

Lippman came across an online review of a boot, invented by a company called Apex Ski Boots, that drastically minimized the shell. The Apex’s structural integrity comes from a scaffoldinglike frame that surrounds a plush, detachable inner boot with a waterproof exterior and sneaker-style sole. Three turns into his next downhill run, Lippman says, “I was immediately sold.” No pain. No numbness. Now his wife and daughters ski in them, too.

There hasn’t been a market-research study to assess how many skiers hate their standard-issue boots. But if anecdotal evidence is any measure, it’s surely all of them—including, at one point, Apex Chief Executive Officer Kevin Tice. A native of Colorado and former Wall Street banker, Tice, 54, recalls a particular afternoon in 1983 at Loveland Ski Area, west of Denver, when he ducked into the lodge because his right foot was stinging. “I took off my boot, and my big toe was bleeding, and the nail was ready to fall off,” he says. On his next lift ride, he sat with a ski patroller. “Don’t worry about the pain,” the patroller said. “All good skiers lose their big toenails.” The absurdity of the comment stuck with Tice: “I thought it was crazy. Here was this product that mangles your foot, and people had just accepted it.”

Conventional recreational ski boots “are nothing more than dumbed-down race boots,” says Apex co-founder Roger Neiley. Manufacturers such as Salomon and Nordica recruit racers to test models, providing feedback that heavily influences final designs. But racers don’t care if their boots hurt. Because they’re hurtling down steep pitches at 90 miles per hour, they need granite-stiff plastic that responds to the slightest input to keep their skis’ metal edges gripped to the snow. Normal people don’t ski like this. “Racers are only on the course for two minutes,” says Neiley’s co-founder, Denny Hanson. “They have huge pain thresholds. And they’re willing to give up comfort for any nuance of performance.”

Neiley, 65, competed in giant slalom and downhill for the Colorado College ski team in the early 1970s; he went on to work for the now defunct Raichle, developing boots with more give. For Hanson, 73, the journey to Apex began with his father, a chemist at Dow Chemical who held more than 120 patents, including one for a plastic that remained supple at subfreezing temperatures. In the mid-’60s, Hanson started making boot-liner cushions from the material, called Flolite, and in the ’70s launched a company with his brother. Their first product was a boot that opened from the back, like a hatchback, which fit more foot shapes and generally required less costly customization to make it tolerable.

By 2006, Neiley was two years into a product engineering gig for a snowboarding company in Southern California. “I kept thinking about why skiers had to be locked into this rigid, cold shell,” he says. By contrast, snowboarders, whose soft-shelled boots are more flexible, got to enjoy pain-free riding. Neiley called Hanson, whom he’d known since his ski-racing days, and the two quickly agreed that boot technology had evolved enough that the impossible should be possible.

Hanson and his brother had sold their boot business to a Japanese company in 1984, and Hanson left the ski industry. He was a member of the Boulder Country Club, which was populated with aging skiers fed up with agonized feet. Tice was also a member. He and Hanson were introduced by a mutual friend, and Tice agreed to help the fledgling company fundraise. They didn’t have to go far to find investors. The club was full of “guys who just wanted to have fun, be with their family, their kids,” Tice says. “They immediately got the Apex idea. We passed the hat around to our golf buddies and raised $500,000.”

The co-founders knew they could never compete with multibillion-dollar ski conglomerates if they had to mass-produce their product using the same costly molds required to make conventional boots. Scott Russo, vice president of Nordica’s U.S. subsidiary, says a set of molds for a single size runs about $140,000. Most boots come in 9 or 10 sizes. (Nordica manufactures 410,000 boots a year; Apex is now up to 5,000.) “When you want to introduce a new model in your line, you’re in for at least a million bucks before you’ve ever built boot No. 1,” Russo says. “The companies that dominate the landscape are highly invested in very traditional architectures. It confines what you are able to do.”

Neiley and Hanson began prototyping by carving mock-ups into clay and later crafting them from strips of carbon fiber. (“I love to fool with boots,” says Hanson, who held boot-hacking parties in high school.) Their initial efforts looked a lot like a typical boot. “Then we started cutting away all the areas we didn’t need,” says Neiley. They ended up with a three-part exoskeleton, of which only a short span beneath the sole would have to be hard, injection-molded plastic. Their molds cost $35,000, a quarter of what the major manufacturers spend. “We didn’t have to mortgage the farm to get into business,” he says.

More than 15,000 skiers worldwide wear Apex boots, says Tice, who adds that almost 95 percent of those who try them buy a pair. “I have e-mails from people telling me they could no longer ski, and our boot reunited them with their families,” he says. Still, Tice can barely get ski shops to return his calls. That’s because the Apex generally fits right off the shelf and costs $795 to $995. Standard plastic shells can be found more cheaply, for about $450 to $950, but they demand hours of tweaking, as Lippman experienced. The money retailers typically charge for this comes on top of pricey add-ons such as orthotic footbeds and custom-molded liners that can double the cost of boots.

Every year, test fitters gather at Mt. Bachelor ski area in Oregon to evaluate several hundred boot models. They gave Apex two innovation awards last year. The company is introducing a model this season that addresses issues testers have complained about in previous versions: namely, that the boot lacks stiffness at high speeds and is incompatible with certain ski bindings. But some dismiss the Apex as a niche product. “They’re never going to be a No. 1-selling boot because they’re just too unconventional,” Nordica’s Russo says.

This mentality confounds the Apex team. “To suggest Apex is niche underscores the closed-minded thinking that pervades the ski boot industry,” Tice says. He points out that skis have undergone a major metamorphosis in recent years. They’re shorter, with bowed bases, skinny waists, and wider tips and tails. The hourglass design of these “shape skis” makes maneuvering a lot easier—skiers no longer have to deal with burning quads. Even so, boots are still designed to generate the brute force it once took to tame long, stiff, unforgiving planks.

“Our frustration is the disconnect between our customers, who love the boots, and dealers continually telling us to stay away,” Tice says. “They look at our boot, and their initial response is, ‘Well, if it’s so comfortable, it can’t perform.’ ” In other words, it’s not that the Apex can’t deliver; it’s just that most skiers presume that if their boots aren’t hurting, they’re not working. (I was similarly brainwashed: I tested the Apex last season at Vail, and as I charged down black diamond tree runs on a powdery day, I kept waiting for the boots to inflict pain.)

Apex is working slowly to overcome this twisted logic, with a little help from satisfied customers. After years of hounding, Lippman was finally able to persuade the owner of his local ski shop in Santa Fe to carry the Apex. What did Lippman tell him? “The sport of skiing should be a fun activity, something enjoyable,” he says. “It’s not something that should be hampered by our feet hurting all the time.

Posted in Articles and tagged with Bloomberg Businessweek. RSS 2.0 feed.