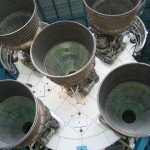 To land humans on the Red Planet, NASA will need new equipment, fresh thinking, and advanced technology. These companies are preparing for mankind’s next giant leap.

Attention, people of Earth: We are going to Mars. This is no sci-fi fantasy; for the past two years, NASA has been gearing up to meet the Bush administration’s goal of landing humans on Mars by around 2030. The agency plans to set up a base on the Moon by 2020 to act as a staging area; that effort alone is projected to cost at least $104 billion. Throw in the round-trip voyage to Mars, and John Edwards, space systems analyst at Forecast International, estimates that the total cost of the program will top $400 billion—making it history’s largest government-backed science project.

Money is already being spent: NASA’s 2006 budget allocates $16.4 billion, much of it for the development of a new spacecraft, called the crew exploration vehicle, that will replace the trouble-plagued space shuttle and carry humans “to the Moon, Mars, and worlds beyond.” The candidates to design and build the CEV are familiar names—Lockheed Martin (Research) and a combined Northrop Grumman (Research)/Boeing (Research) team are the leading contenders right now—but NASA’s multibillion-dollar shopping spree will create unprecedented opportunities for companies that haven’t traditionally been involved in spaceflight. For example, heavy-equipment manufacturer Caterpillar (Research) has worked with the space agency to develop “regolith-handling” construction machinery. (“Regolith” is the geologists’ term for extraterrestrial dirt.) Hundreds more contracts will be signed in the decades ahead as the space agency seeks to address the basic needs of deep-space astronauts—oxygen to breathe, food to eat, fuel to burn, and communications networks to stay in touch. These three companies are already positioning themselves to secure a lucrative spot on the launch pad.

Rick Sanford has an unusual resume by Silicon Valley standards. A former Air Force cryptographer and security consultant who helped combat drug smugglers in South America, Sanford is now the director of space and intelligence initiatives for networking giant Cisco (Research). His job is to manage the millions of R&D dollars Cisco is spending to become competitive on the final frontier.

Just as we’ve become accustomed to hyperfast voice, video, and data links, future explorers will require similar connectivity as they travel the solar system. “The goal is to make Washington-to-Mars communication indistinguishable from Washington-to-San Francisco,” Sanford says. To accomplish that he’s assembled a team of 14 researchers—radio specialists, computer programmers, and theoretical physicists—to attack the problem. The challenges are like those encountered on Earth, only hugely amplified. Time delays are counted in minutes, rather than milliseconds. Equipment will be exposed to severe radiation, heat, and cold.

Cisco is already getting ready. The company has tested its networking hardware inside NASA vacuum chambers. It has subjected its routers to 30 Gs of force to replicate the brutal stress of a rocket launch. And in 2003, Cisco successfully operated an off-the-shelf router in Earth’s orbit, after installing the hardware aboard a British satellite. Ultimately, constellations of communications satellites may circle the Moon and Mars to provide the backbone for an interplanetary data network—a market that could generate more than $750 million worth of business for companies like Cisco. “Nontraditional space companies have to invest for a 20- to 30-year time frame,” Sanford says. “They need to make decisions today if they want to provide successful technology when we’re ready to go to Mars.”

At first glance, Dynamac’s life-sciences lab looks like a meat locker. Two rows of aluminum-clad doors span the room from end to end; behind each is an “environmental growth chamber.” But rather than a cold breeze, the open doors release a warm blast of humid air and a blaze of bright light. Inside one chamber, six varieties of strawberries grow in plastic buckets linked by a lattice of thin vinyl tubing. There’s no soil; instead, a hydroponic feeding system bathes the plants’ roots in nutrient-rich water. Sharon Edney, a Dynamac plant biologist, explains that the chambers simulate the “less than ideal conditions” inside a stuffy Mars habitation module. “It’s like The Right Stuff,” Edney says. “The winning strawberry gets to go into space.”

Founded in 1970 by a small team of engineers and scientists, Dynamac is an environmental research and natural-resource management company. Its development of space strawberries was conducted under a 10-year contract from NASA to develop “bioregenerative life-support systems”—technologies that will allow astronauts to survive in space without having to haul all their food and water from Earth. As part of that effort, Dynamac also developed bioreactors, a technology that uses microbes to break down urine, feces, and dirty water into usable components such as water, oxygen, nitrates, and ammonia (for fertilizing plants).

There’s also the potential for civilian spinoffs: Dynamac’s bioreactors could be used to recycle waste products and produce food in remote locations where clean water is scarce. Earning a place on the Mars mission would be ideal, but Dynamac’s Mars research means that the company is also poised to pursue opportunities closer to home.

Long before NASA decided to send a team to Mars, Robert Zubrin was designing the engines needed to get there. As an engineer for Lockheed Martin, Zubrin pursued experimental propulsion technology for interplanetary missions. In his spare time, he wrote “Mars Direct,” a groundbreaking white paper (and, later, a best-selling book titled The Case for Mars) that outlined a no-frills plan to explore the Red Planet. Over time, Zubrin grew frustrated with his employer’s lumbering pace, so he quit Lockheed in 1996 to found a company of his own, a bleeding-edge R&D firm called Pioneer Astronautics. His goal: to develop new technologies for a trip to Mars.

NASA awarded Zubrin his first research grant, for $70,000, in 1996. Beyond that, explains Pioneer research chemist Tony Muscatello, the company has “survived from contract to contract” while working for the Department of Defense and breathing-air-system specialist Neutronics. Now that the Mars project is gaining momentum, however, Pioneer’s expertise has become more valuable. In October 2005 the company won its largest NASA contract to date: a two-year, $600,000 award to build a device called an integrated Mars in-situ propellant production system. The concept uses a chemical reaction to produce rocket fuel from carbon dioxide in the Martian atmosphere. “What’s different now,” Zubrin says, “is the potential for access to the funding needed to take these ideas beyond the research stage and into flight hardware.” Translation: After years of hard work, his big payoff may finally be at hand.

Posted in Articles and tagged with Business 2.0. RSS 2.0 feed.