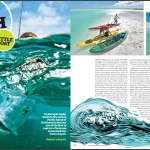 From the deck of a large wooden outrigger with a sputtering motor, I carefully slide my kayak into the Pacific Ocean. Setting yourself adrift at midday, nearly smack on the equator, in a 13-foot-long plastic kayak more than 1,000 feet above the sea floor is, by any reckoning of seamanship, an act of profound foolishness. And yet, having bid my mother ship farewell, here I am, ripening like a hothouse tomato beneath the high-noon sun while trade winds buffet my 56-pound polyethylene tub. There is an island nearby, Kiritimati (or Christmas, a phonetic deduction from Gilbertese, the regional language, which pronounces “ti” as “s”), but even if I made the hour-long paddle to shore, landing would be impossible. A fringe of reef rings Kiritimati, its coral heads protruding like pitchforks through foaming 10-foot surf. Attempting to pass this gauntlet would shred any vessel and its occupants. I try not to consider such a fate as I cast a lure bigger than my foot and wait with trepidation. Whatever swallows this, I presume, is going to be enormous.

I’ve come to Kiritimati with two kayakers. Allen Sansano, a 42-year-old microchip engineer who lives in San Jose, Calif., is trolling about a half-mile north in his yellow ’yak, as the lingo goes. Sansano has paddled far-flung waters—British Columbia’s Nootka Sound, the Sea of Cortez off Mexico’s Baja Peninsula—hunting pelagic trophies. In 2007 in Prince William Sound, Alaska, he landed a 400-pound salmon shark on the foredeck of his kayak. It’s purportedly the largest fish ever caught from such a vessel. Casting a 6-ounce popper lure precariously close to the roiling Kiritimati breakers is David Elgas, 45, from Haleiwa, Hawaii, on Oahu’s North Shore. Elgas is a professional kayak guide whose company, Coastal Kayak Tours (www.coastalkayaktours.com), offers excursions throughout the Hawaiian Islands. Elgas claims the world kayak fishing record for a giant barracuda. He caught the toothy 65-pound beast near surf-mauled Ka’ena Point, the rugged western cusp of Oahu.

Sansano and Elgas, who met in 2007 at a kayak-fishing contest in Kona, Hawaii, and helped pioneer the sport, have come to Kiritimati to explore its kayak fishing potential. We are, in fact, the first kayak anglers ever to venture here. And though any big fish will do, our aim is to hook a giant trevally, a crafty hunter that has long attracted bucket-listers to Kiritimati. The trouble has been access: Because the reef is treacherous to navigate, it’s not always possible to angle from a boat. And many square miles of the interior lagoon—a cerulean labyrinth of sandbars and salt flats—are waist-deep and passable only by wading. But with drafts measured in mere inches, kayaks can penetrate deep into Kiritimati’s untapped trevally hot spots.

Giant trevally can exceed 5 feet in length and top?100 pounds, enough to capsize a newbie kayak angler?like me. They are fierce fighters that battle a set hook?savagely. Off Kiritimati, they’ll dive and dart through?the bulbous coral heads until the line severs. “Once?he’s hooked he’ll run into deep water or into the rocks,”?Sansano warned. Earlier, Elgas suggested I pack a?knife in my life vest. “To be able to cut yourself free in?an emergency is good,” he said. I tap my left hand on the zippered pocket of the vest. Feeling the knife there is reassuring.

KIRITIMATI IS PART OF THE REPUBLIC OF KIRIBATI (pronounced kiribahss), a sovereign nation of 33 islands strewn like loose pearls over an expanse of the Pacific Ocean twice the size of Alaska. Just a three-hour flight from Honolulu, it is the largest coral atoll in the world, discovered, uninhabited, on Christmas Eve 1777 by Capt. James Cook. Its pincer-shaped landmass encloses a 120-square-mile lagoon enriched by tides that flush through a 3-mile-wide breach in the atoll’s rim. In 1975, the Kiribati government declared the entire island a wildlife sanctuary, chiefly because it’s a vital nesting and breeding habitat for at least 35 bird species. Today, aviary populations thrive here, despite U.S. and U.K. atmospheric nuclear testing conducted above Kiritimati in the late 1950s and early 1960s, which flash-blinded and subsequently killed millions of seabirds but left no residual radiation (the Geiger counter I brought confirms this). More birds nest on Kiritimati than on any other oceanic island—up to 6 million during mating season.

Of the 5,100 people who reside on Kiritimati, only a handful speak English. But the immigration official who flips through my passport looking for an empty page on which to plant her entry stamp is reasonably proficient. When I inform her that I’m a writer here on assignment, she says, “You need a special permit if you’re a journalist. Can you provide it?” I confess ignorance, so she offers a work-around. “It’s better just to say you are fishing or surfing. Are you fishing or surfing?” Um, fishing? “Welcome to Kiritimati,” she declares, waving me through. Watching this exchange is a burly 6-foot-tall fellow, a uniformed customs agent in a neatly pressed sky-blue shirt and navy knee-length shorts. He’s standing next to a hand-painted sign that states the liquor limit: one liter of spirits per arriving visitor. I’m carrying two. He sees both bottles in my hand luggage. When I tell him I plan to share, he smiles. “No problem, no problem.” Only then do I notice he’s barefoot.

The airport is a stifling clapboard and cinder block affair with a tin roof. Just outside, Ioran Kaiteie, our local guide, is waiting for us. He’s been leading anglers into Kiritimati’s lagoon and offshore for 15 years, but until now he’d never heard of kayak fishing. We pile into the back of an open-air flatbed truck with bench seats for the 45-minute drive to the Dive & Fishing Adventure Lodge (www.christmasislandadventurelodge.com), our modest accommodations (more clapboard and cinder block) for the next week.

Resourcefulness is survival on Kiritimati. Passing through sleepy settlements, I notice a church bell made from discarded scuba tanks. Scrap metal is lashed together with twine to fashion chicken coops and pigpens. There’s a rusted refrigerator lying in repose as a makeshift cupboard. In one village, a 40-foot cargo container has been repurposed as a police station, with a door?and two windows cut into its whitewashed steel walls. Many structures have rainwater?cisterns. Though precipitation?averages 35 inches annually, little is ?retained because the island sits on?porous carbonatic rock with only?a dusting of topsoil; thus, severe?droughts are common. A handful?of wells provides supplemental water, but it remains a carefully guarded commodity. Chewing gum is wildly popular on Kiritimati. Kaiteie, who is always chomping a wad, explains, “It keeps us from feeling thirsty so we don’t have to drink water.” Islanders subsist primarily on seafood, along with some local produce, like cucumbers, cabbage and breadfruit. Everything else is imported, usually on cargo ships that arrive every three or four months.

By far the largest industry on the island is the production of dried coconut pulp, called copra. Kiritimati is pancake-flat, suitable for cultivating sprawling palm plantations. While scouting by truck for kayak put-ins along the lagoon’s low-lying eastern margins, we skirt a dozen miles of coconut-laden palms arranged in orderly groves. But the topography also puts Kiritimati in the crosshairs. If climate-change predictions pan out, rising sea levels will inundate the island. Then again, this process could take centuries. Kaiteie, who has four young children, fears a different apocalypse. He remarks, “If a tsunami ever came, we’d all be lost. Everything. Gone.”

THE PHRASE IS “SLEIGH RIDE,” ELGAS TELLS ME, AND IT refers to what will occur if I hook, say, one of the big Pacific bluefin tuna that prowl Kiritimati. “The thrill is getting towed around by a monster fish,” he says. It’s also the peril. An adult bluefin (or any big-game species) can drag a kayaker around for hours—out to sea or, worse, into Kiritimati’s bone-crushing coral reef. While I ponder this, trolling the Cecile Peninsula, Kiritimati’s westernmost point, there’s a powerful tug on my line. I clutch the rod and, in a blink, my kayak spins 180 degrees and nearly barrel-rolls. Just then, the rod recoils toward my face and the line goes slack. A silhouette seems to hover about 30 feet below and then vanishes. A giant trevally? I can’t be certain. In the fog of war, things get hazy.

Nevertheless, having been coupled to that power even momentarily is enough to kindle a maniacal persistence. It’s the reason why, on our third day on Kiritimati, Elgas paddles offshore for seven hours, casting a thousand times like a man possessed, until lactic acid makes his forearms seize up. And it’s why, on that same afternoon, I slog a half-dozen miles into headwinds and swells, trolling a topwater lure. I have no particular strategy other than methodically scanning the horizon for bird piles. These occur when deep-water predators charge upward to chow on shoaling schools, forcing them to the surface, at which point seabirds swoop in for an easy feast. I paddle slowly, my lure trailing 50 yards behind, waiting for that heart-pounding “screamer”—the wail of a whirring reel when a hook-in-mouth heavyweight makes its dash for freedom. Alas, today my reel is silent.

The giant trevally has eluded us, and by our fourth day on Kiritimati we are forlorn. Since we had fished exclusively with lures, Kaiteie suggests we adopt native tactics and bait our hooks with milkfish from the lagoon, which he’ll stalk wading through the flats with a hand-pulled seine. As a pod of spinner dolphins cavorts nearby, we trail Kaiteie aboard our outrigger mother ship, three kayaks strapped to a platform over its starboard pontoon. He dices the milkfish into 1-inch chunks and tosses them overboard while sooty terns and frigate birds ?flutter above, sniffing a meal.

Within seconds, I spot about six giant trevallies in the translucent shallows. They are sleek, shiny platters. We had intended to launch the kayaks and angle a bit deeper into the lagoon, but the trevallies aren’t waiting. I plunge into thigh-deep water, a baited hook on my rod, and they are on us like feral dogs. Standing shoulder to shoulder, we cast into a frenzied pack. Sansano gets a bite, but his line snaps. And then a 40-pounder seizes my hook. Elgas shouts, “This is only a 35-pound rod! You need a 45-pound one. This one is going to break!” At first it runs hard, and then it reverses course toward the rocks. Fearing a sliced line, I scuffle over to the edge of the coral bed, wearing only flip-flops to protect my feet from the razor coral, and reel madly as my prey bolts and charges. Time is amorphous—perhaps 20 minutes pass—but the giant trevally eventually tires. I reel it in and hoist it into my arms. Kaiteie waddles over and pries the hook from its sturdy jaw. Someone takes a picture. The shank is bent. The trevally is still heaving from our duel when I dunk it below the surface and give it a gentle nudge to set it free.

I catch my breath, registering just a touch of disappointment at not landing it from my ’yak. No matter, we decide. We found the lair. We’ll be back.

Posted in Articles and tagged with Hemispheres. RSS 2.0 feed.