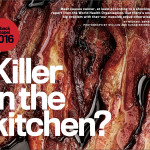 Meat causes cancer, at least according to a shocking report from the World Health Organization. But there’s one big problem with that—our muscles argue otherwise.

The founding father of modern dietary science was a German chemist named Carl von Voit who loved to dispense advice on how to build big muscles. His favorite maxim: “Flesh makes flesh.” In the mid-1800s, physician von Voit made discoveries that led to what every bodybuilder now knows: Consume animal protein, or “flesh,” and your muscles grow. To the recent World Health Organization (WHO) report villainizing red meat, von Voit would have declared bullshit. (That’s quatsch in German.) And his outrage would’ve been justified.

The WHO’s International Agency for Research on Cancer assembled a 22-member team of experts to cull through more than 800 studies that examined whether red-meat consumption increased cancer risk. The takeaway: 50 grams of processed meat a day—that’s one hot dog or six slices of bacon— raises your chance of getting colorectal cancer by 18%. And red meat,  whether it’s beef, lamb, or pork, is just as dangerous, though precise odds were harder to come by. As a result, the WHO added processed meat to its so-called Group 1 list of known carcinogens, which includes stuff like plutonium, cigarettes, and sunshine. Red meat joined the WHO’s Group 2A list of “probably carcinogenic” compounds, sharing the cancer party with lead and DDT.

It all sounds rather terrifying until you look more carefully at what the WHO data really conveys. Five out of every 100 of us will get colorectal cancer. We knew that already. Eat meat every day, warns the WHO group, and you’ll increase your risk a whopping 18%. Sounds scary until you do the math, which equates to six in 100 people, or just one additional case above the norm. “A small increase over a very small number is still a very small number,” notes Stephen Kritchevsky, Ph.D., a professor of internal medicine who directs the Sticht Center on Aging at the Wake Forest Baptist Medical Center. Meat’s debut on the Group 1 and 2A blacklists is also misleading because it has nothing to do with your actual chance of getting cancer. For meat, that likelihood is minuscule; for plutonium, inhale the stuff and you’re pretty much guaranteed to glow in the dark and develop cancer. They’re both carcinogenic but, obviously, to a very different degree.

Now, let’s assume you’re not gorging on prime rib and pepperoni at every sitting (and if you are, please stop, because numerous studies have already demonstrated why this is a really bad idea, leading to diabetes, heart disease, and obesity—all of which make you more likely to get cancer). And let’s also assume your BMI is relatively normal and you exercise regularly, perhaps four or five times a week. For you, the WHO report is more or less irrelevant.

Here’s why: First, the WHO report relies on survey data. That is, asking people to recall what they ate last night, last week, and so on. “There are no controlled research studies that make the direct connection between red meat and cancer,” says Donald Layman, Ph.D., a professor of nutrition at the University of Illinois and a leader in protein science. To conduct such a study would be logistically impossible: You can’t exactly lock a bunch of dudes up for six decades, feed them exclusively meat, and wait to see what happens. So we’re left with surveys, which tell us nothing about meat but a lot about the kinds of people who eat too much of it. So who are they? Often poor, overweight, smokers, and sedentary. “These are the folks who have breakfast at McDonald’s, have their next meal at Burger King, and end their day with pizza,” says Layman. “It’s not using meat in a healthy diet, it’s a story about healthy lifestyles and unhealthy lifestyles.”

Millions of years of evolution primed our muscles to thrive on animal protein, which means there is almost certainly nothing inherently carcinogenic about meat consumed in modest amounts. If there were, our species would have vanished long ago. “It’s hard to get a more concentrated form of nutrition for protein and vitamins and minerals than from meat,” Layman says. Even so, too much of a good thing has consequences. A few cigarettes in college are harmless; a pack-a-day habit for decades is certain death. Indeed, almost anything in excess will make you sick.

In 2012, the American Journal of Clinical Nutrition published an article titled “Is Everything We Eat Associated with Cancer?” The authors, attempting no irony, surveyed 50 ingredients from common recipes and found that 40 of them had been linked to cancer in this or that study. (Curiously, just as many ingredients purportedly reduced cancer risk— go figure.) “You have to keep in perspective that there is a healthy amount of meat—four to eight ounces is outstanding—but nobody needs to eat a 20-ounce steak,” Layman says. (He’s talking to you, Outback Steakhouse.)

Still freaked out by the WHO report? Consider how the meat is prepared. Meat cooked at high temperatures, above about 500°F, starts forming nasty carcinogenic compounds called heterocyclic amines (HCAs) and polycyclic aromatic hydrocarbons (PAHs) in large quantities. So keep the flame lower, aiming for medium rare—HCAs and PAHs nearly quadruple in well-done meat—and cut off the blackened bits after cooking.

Seasonings and side dishes can defend against cancer, too. Many foods are what scien- tists call “mutagen inhibitors.” HCAs and PAHs can mutate DNA, particularly inside the cells that line your colon, eventually turning them cancerous. A mutagen inhibitor, as you might have guessed, can reduce or even eliminate this effect. Research shows that meat marinated in dark beer reduces PAHs by about half. (Sadly, drinking beer isn’t nearly as effective.) Using beef rubs that contain turmeric, garlic, onion powder, or rosemary can reduce HCA formation by up to 94%. Cruciferous vegetables— broccoli, Brussels sprouts, cabbage, bok choy—are also potent mutagen inhibitors, according to several studies. So eat your damn meat. But whenever you do, recall your nagging mother’s voice: “Eat your greens, too!”

Posted in Articles and tagged with Men's Fitness. RSS 2.0 feed.