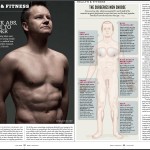 Men tired of working their asses off in the gym and not seeing results are now turning to a radical new surgery to get the perfect stomach.

It’s 12 o’clock on Friday in Denver, Colorado, and Stephen Riebold, a 38-year-old engineer, has just stood up from his chair at Panera Bread Café and lifted his shirt to reveal to me (and the other 80 people eating here) the most ripped six-pack abs I’ve ever seen on a human being, Batman included. His obliques appear ready to burst through his skin. His serratus are those of Adonis. His abdominis are rippling quicksilver.

It’s all the more astounding considering Riebold is not racing in the Tour de France or competing in the Ironman this fall. In fact, he’s not a pro athlete at all; he’s barely a jock, and other than his stomach, he isn’t even that slim (his face and arms are a little pudgy). His miraculous midsection is the result of a novel procedure called high-definition liposculpture. It’s a more advanced cousin to conventional lipo, which uses a metal tube to suck up fat like a Shop-Vac. For Riebold’s procedure, however, which he had done five months ago, Denver plastic surgeon John Millard had stuck a VASER (Vibration Amplification of Sound Energy at Resonance)—a sleek stainless-steel probe the length of a chopstick—into his gut and did what lipo cannot: He sculpted Riebold’s existing body fat so that it molded to his abdominal muscles like shrink-wrap.

“For the first week after the surgery it felt as if I’d been hit by a bus,” Riebold says. But within three weeks he was back in the gym, working out harder than he ever had before. “The surgery was a catalyst for a lifestyle change,” he says. “I run 10 miles a week and I’m in better shape now than when I was 20 years old.”

Riebold’s results help explain that, while cosmetic surgery is on the decline among men (rhinoplasty fell by 12 percent and hair transplants by 35 percent from 2006 to 2007), high-def lipo has surged. Since 2004 about 1,500 people have undergone the $16,000 to $20,000 procedure that Alfredo Hoyos, a plastic surgeon in Bogotá, Colombia, began developing in 2002.

Hoyos, who is 36 and runs a thriving practice in Bogotá, was tinkering with the VASER—a piece of equipment the size of a Xerox machine with a metal wand that uses sound waves to dissolve fat—on cadavers when he noticed it was delicate enough to manipulate the thin layer of fat just beneath the skin without harming vital tissue. This so-called “sacred centimeter” is superficial subcutaneous fat (as opposed to deep fat), and it’s virtually impossible to burn off during exercise.

“You have to get down to 3 to 5 percent body fat [Lance Armstrong had about 4 percent during his racing days] before it starts to go away and you get that sculpted look,” says Millard. Lipo surgeons steer clear of subcutaneous fat because it’s chock-full of blood vessels and connective tissue. Damage the sacred centimeter and you get excessive bleeding, bruising, and deformities—holes and lumps along the surface of the skin.

“Leaving this layer alone during lipo surgery prevented us from shaping and reshaping,” says Hoyos. “Everyone told me this was dangerous, but I discovered that it was possible to work in the sacred centimeter—the holy grail of liposuction—because the instruments we were using were so precise.”

A FEW DAYS BEFORE I MEET REIBOLD, Hoyos takes me through Sound Surgical Technologies, the Louisville, Colorado–based firm that invented the VASER. He has just come from Singapore, where he taught six surgeons VASER 101, and is in Colorado for a week of meetings with Millard and the VASER engineers. In the Sound Surgical lab, Hoyos plops a blob of Crisco on a table and informs me that the consistency of the shortening at room temperature is almost identical to that of human body fat. He turns on the VASER, which whines faintly as it discharges 36 kilohertz of high-frequency sound waves (a dog whistle emits about 22 kilohertz), and begins deftly fashioning the white goo into what looks like a golf ball–size ab muscle. “I am a professional painter and sculptor,” Hoyos tells me. “I do abstract art but also a lot of human figures. Part of the skill is having an eye for doing it.”

The procedure, which takes between two and five hours, typically begins the way a day at the gym starts. Before heading into the operating room, you do crunches, leg raises, and other core-grinding exercises to pump up your abs, while your doctor uses a Magic Marker to sketch the edges, grooves, and curves of contracted muscles. Once in the OR, the surgeon inserts a VASER probe into your abdomen and begins melting the fatty layer immediately under your skin, essentially separating the skin from the fat as you might do with a chicken breast. He continues emulsifying fat out of the valleys between the muscles, leaving fat on top of the muscle itself, thus enhancing its contours. The liquidized lard is then extracted by a tube designed to suck out only the melted fat. When he’s finished, he lets the skin settle back into place, where it forms to the newly sculpted frame. There can be some pretty serious swelling that can last weeks—even months—but the surgery is actually safer than traditional liposuction, which can accidentally pulverize blood vessels and nerves.

Although neither Hoyos’s nor Millard’s patients have experienced long-term negative results, sloppy surgery can result in deformities and scarring. If there’s any major backlash among the medical community, it’s the fear that surgeons without enough experience will begin performing the operation. “Inexperienced VASER surgeons can easily cause more harm than good,” says Dr. Mark Richards, a Maryland-based plastic surgeon. “If the surgeon takes shortcuts to save time, the results can be disastrous.”

But for the many who’ve had positive results, the procedure has generated a profound psychological impact: Post-op patients relish a newfound drive to stay slim, eat healthier, and redouble their workouts. “After the surgery my patients fell in love with fitness all over again,” says Hoyos. “I had one guy who was kind of a couch potato. He had the procedure, and now he’s running marathons.”

Brad Hamilton, a 44-year-old finance exec, traveled from Toronto to Denver to get his new washboard installed in May 2007. “I worked out three days a week. I ate well. I took really good care of myself. But I wasn’t seeing results,” says Hamilton. “Every year my spare tire was getting harder to take off. Now I have no love handles, and I see results a lot faster. It gave me the push I was looking for to train harder. It’s also pretty amazing when you wake up, you look down, and suddenly you’re 18 years old and ripped again.”

BACK AT PANERA BREAD CAFE, Stephen Riebold offers to let me touch his abs. I’m expecting something spongy, but they feel like granite. Millard later explains to me that many fat cells are killed by the VASER during surgery—and because of that, “You can gain up to 15 pounds and still boast a six-pack. With regular lipo, when patients start to eat again, they get fat again.”

This would explain why the rest of Riebold’s body appears a little chubby. But that doesn’t seem to bother him; he cares only about what’s covered by his shirt most of the time. “My abs are the closest thing to a miracle I’ve ever experienced,” he gushes.

Posted in Articles and tagged with Men's Journal. RSS 2.0 feed.