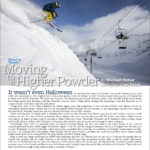 Most Rocky Mountain resorts have just one (obvious) advantage over the East: elevation.

It wasn’t even Halloween yet and skiers last season in Colorado were already choking on face shots while their counterparts in New England had to wait at least another month for freshies. By April, Vermont resorts melted out just as Colorado had its fattest snow month of the year. The worst news for some: The discrepancy was normal. Mountain resorts in the Colorado Rockies almost always boast longer seasons than ski areas in the East. Naturally, everyone wants to blame global warming. But climatologists warn that short-term (10- to 20-year) weather trends don’t make for good science.

“Longer-term, some of the better predictions do indeed suggest more total precipitation in the Colorado Rockies,” says National Center for Atmospheric Research project scientist and avid ski mountaineer, Ethan Gutmann. But all Gutmann, or any climatologist, can tell us for certain is that most Rocky Mountain resorts have just one (obvious) advantage over the East: elevation.

Global warming aside, it’s simply colder at Arapahoe Basin (10,780 feet base elevation) than Okemo (1,144 feet), so when moisture moves in, it falls as snow, not rain. As a rule of thumb, temperature falls 3.3 degrees with every 1,000 feet above sea level. Put another way, folks in Boston have to wait until it’s 38 degrees at home until it’s snowing at Okemo—their go-to resort. Meanwhile, Denverites can be basking in balmy 50-degree temps and it’s still nuking at A-Basin, and Colorado’s low humidity (less insulative air) can increase this advantage by about 10 degrees.

Climatologists won’t point to a particular season as evidence of climate change, but they aren’t afraid to say what’s coming. A new batch of computer-generated forecast models suggest all mountain regions in the U.S. will see average temperatures rise up to six degrees over the next 30 to 70 years. Fortunately, if you’re in Colorado, where most resorts are perched above 9,000 feet, “it would have to be hugely warmer before we didn’t get snow,” says Colorado State Climatologist, Nolan Doesken. But for eastern resorts, a six-degree rise would mean goodbye winter. Climate models project similar doom for the comparatively low-lying Cascade and Sierra Nevada ranges.

Keep in mind that climate predictions are riddled with uncertainty and error. So Colorado may not pan out to be the powder paradise that the research data promises. Still, the height advantage in the Rockies should ensure that precipitation remains white, at least for another half-century. And even if Colorado does dry out more than expected, it’ll be plenty chilly to fire up the guns. By mid-September, Loveland is usually spraying manmade snow on its Catwalk run, while Stowe doesn’t typically begin blowing until early November. That’s why some East Coast ski teams cough up big money to train at Loveland or Copper. “The dramatic difference in elevation helps us out a lot,” says Copper’s Stephanie Sweeney.

Posted in Articles and tagged with mountain. RSS 2.0 feed.