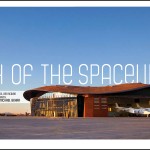 It’s the culmination, some say, of New Mexico’s manifest destiny, set forth in the 1930s when Robert Goddard, the preeminent patriarch of rocketry, developed the first guided missiles at a secret site in nearby Roswell. Since then, aerospace has played an integral role in the state’s economy and identity, chiefly through projects at White Sands Missile Range, the largest U.S. military complex, which abuts Spaceport America’s property.

Now, with the terminal in place, pavers finishing a 12,000-foot- long runway, and 7,500 square miles of restricted airspace, the countdown is on: Sometime in the near future, Richard Branson’s Virgin Galactic will lift off from Spaceport America carrying six passengers at a time aboard SpaceShipTwo, a rocket-powered aircraft dreamed up by aerospace whiz Burt Rutan and the future-minded engineers at his company, Scaled Composites.

A jet-powered mother ship, WhiteKnightTwo (also a Scaled Composites creation), will ferry the spaceship to its 50,000-foot launch altitude. There, SpaceShipTwo will uncouple from WhiteKnightTwo, ignite a rocket motor and accelerate to 2,500 miles per hour in a mere ten seconds. At nearly 70 miles up, having exited Earth’s atmosphere, passengers will drift silently for about six minutes in weightless bliss before commencing the long, gentle glide back to Spaceport America.

“We intend to put 500 people into space during our first year,” says Jonathan Firth, Virgin Galactic’s director of operations and projects. “That’s about as many as have gone up in the entire 50 years of manned spaceflight.” The entire sequence—from liftoff to landing—constitutes the first-ever reusable commercial system for whisking astrotourists into space. It all sounds rather sexy and adventurous, and at last count 520 cosmic pathfinders have put down deposits to reserve seats on SpaceShipTwo. Even so, there have been setbacks. Scheduled flights were originally planned to begin a few years ago, but as Firth explains, “Getting into space is hard, so it’s taken a bit longer than we expected.” This is rocket science, after all.

LIFTOFF
Virgin Galactic wouldn’t exist without two people: Richard Branson, Virgin Group’s 61-year-old founder and chairman, and Scaled Composites’ Burt Rutan, whom Branson describes as “the best aviation genius in the world.” As a 19-year-old, Branson watched Neil Armstrong walk on the moon and made up his mind “there and then” to travel to space. He registered the trademark Virgin Galactic in March of 1999, then set out on a world tour in search of partners who could safely build and operate a reusable spaceliner.

“I met with every zany and mad scientist I could find who was interested in rockets and space technology,” Branson has said. The search was a bust until he met Rutan, with whom he eventually teamed up as a sponsor for Scaled Composites’ Ansari X Prize-winning spaceship, later christened SpaceShipOne. In a joint partnership with Microsoft cofounder Paul Allen, Branson invested $14 million to license Rutan’s technology and another $95 million to build five passenger spaceliners over 15 years. “Of all the businesses we’ve developed,” says Firth of Virgin Group’s forays into the music industry, telecommunications, hospitality, and beyond, “Richard is very passionate about this one.”

When Scaled Composites test pilot Brian Binnie claimed the Ansari X Prize on October 4, 2004, Virgin Galactic got one giant step closer to liftoff. Yet, along with redesigning the spaceship to accommodate six passengers and two pilots—an?undertaking that would double its size?to 60 feet—Rutan’s crew faced a host of?issues, among them an intense shaking?during reentry and a need to reduce the?spacecraft’s speed to eliminate high temperatures on the fuselage. The solution: a?first-of-its-kind tail assembly that rotates?upward during reentry to create drag and?stability, modeled after badminton shuttlecocks that invariably fall slowly and?nose-first toward Earth.

Comfort touches include larger windows and foldaway seats that provide passengers room to float around, along with a posh interior cabin indicative of Virgin’s style. On the technical side, Scaled Composites revamped the cockpit with simplified displays and control systems. “We wanted it to be easier to fly so we could use experienced airline pilots and not just test pilots,” Firth explains.

As for the passengers those pilots will fly, Virgin tapped Virtuoso as its exclusive travel partner in the Americas and trained select travel advisors as accredited space agents. When it came time to ensure the experience will be safe and comfortable for the typical luxury traveler, Virgin Galactic’s first 100 ticket holders (including Virtuoso CEO Matthew Upchurch, a Galactic Founder in the seat lottery for flights 2 through 16) and accredited space agents at- tended suborbital spaceflight training at the National AeroSpace Training and Research Center in Southampton, Pennsylvania.

Virgin wanted to make sure they could cope with up to 6 gs that passengers will experience on SpaceShipTwo, Firth explains. “We spun them on a centrifuge—the oldest person was 88 years old—and more than 95 percent did great.”

TOUCHDOWN
While Virgin Galactic’s trajectory steadily progressed, Spaceport America broke ground in 2009 with the spaceline as its anchor tenant—a 20-year lease bringing millions in economic development to the state. The location has numerous benefits: year-round sunshine, a noncorrosive climate, sparse population, restricted airspace, and fuel savings from being 4,600 feet above sea level, meaning roughly the first mile to space is free. But until the first shovel went down, there wasn’t any there there.

“We basically had to build a city in the middle of nowhere,” says Christine Anderson, executive director of the New Mexico Spaceport Authority. “To get all the construction materials there, we had to build a road. We had to put in our own wells, our own water treatment, power, and communications system.” Excavators also turned up 10,000-year-old artifacts, halting construction until archaeologists could survey the find and give the go-ahead.

Today, the project is nearly complete. “The facility is a showplace,” exults Anderson. “There’s a beautiful veranda on the top, with an outdoor patio and a gorgeous view of the San Andres Mountains. It’s very serene. Inside, we’re creating a visitor experience, designing activities and displays and fun things for kids and families.”

But the real thrills should begin in 2013, when the initial six Virgin Galactic passengers are expected to climb aboard for SpaceShipTwo’s inaugural flight. Some four decades after vowing to become a space

traveler, Branson looks set to achieve his wish, and he’s planning on it being a family affair: “Myself, my children, and my mom will go up on that first flight.”