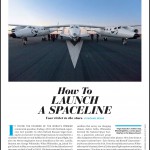 Your ticket to the stars

If you’re the founder of the world’s premier commercial spaceline, finding a CEO with firsthand experience isn’t possible. So when Richard Branson began hunting for an executive to lead Virgin Galactic, he searched for a candidate who had not only dabbled in all realms of spaceflight, but also one whose imagination was as boundless as his own. Luckily, Branson met George Whitesides. When Whitesides, 39, joined Virgin Galactic in May 2010 as president and CEO, he had already served two years as chief of staff at NASA. His duties spanned the agency’s 150-plus ongoing missions—from probes to far-flung galaxies to satellites that survey our changing climate. Before NASA, Whitesides directed the National Space Society, a grassroots advocacy group that champions efforts to colonize other planets. He’s done stints at two space-tourism firms—Zero Gravity and Blastoff Corporation—and was an advisor to the FAA. From his multifaceted career, Whitesides says he’s learned, above all, that spaceflight requires unrelenting perseverance: “You have to go into it with commitment and stick to it.” Think you have the right stuff? Here are the next five steps.

STEP ONE: GET THE BIG BUCKS
Once you’ve got a viable business plan that explains precisely how you intend to ferry tourists into space—and make a profit doing so—you’re ready to pitch investors. For seed money, aim for at least $100 million. That’s the amount Branson initially spent to get Virgin Galactic up and running in 2004. But remember, this was after Microsoft cofounder Paul Allen had already ponied up millions to finance SpaceShipOne. The proof-of-concept prototype led to Virgin Galactic’s SpaceShipTwo—the six-passenger spacecraft that looks set to take its first test flight to space this year. More recently, Aabar Investments, a private equity firm, kicked in another $390 million. Plus, more than 620 passengers have made deposits to secure their seat aboard SpaceShipTwo, amounting to another $120 million for Virgin. Account for cost overruns and technical hiccups, and $1 billion in the bank should be enough to get you to the launchpad. Whitesides says, “We’ve been very lucky with financing, which next to safety is the single most important factor for any space project.”

STEP TWO: CHOOSE YOUR VEHICLE WISELY
To reuse or not to reuse? That was the question Branson pondered in 1999 when he began brainstorming ways to take civilians into space and back safely. Reusable vehicles, like the space shuttle, were notoriously expensive to operate and required long turnaround times to get them flying again. “The shuttle was incredible,” contends Whitesides. “But it was more rebuildable than reusable.” An expendable capsule that gets shot into orbit on the end of a rocket is a cheaper option. But capsules, though proven, are cramped—passengers won’t have much room to frolic in zero gravity—and the free-fall plummet back home is harrowing. Because gravitational forces on reentry can exceed ten times those on Earth, capsules require special training. The solution: Design your own rocket plane. SpaceShipTwo is spacious, has wings that feather for gentle reentries, and is outfitted with a hybrid engine that can be speedily serviced and refueled. “With SpaceShipTwo, we’re engineering maximum reusability,” explains Whitesides.

STEP THREE DO THE SAFETY DANCE
The space shuttle and its precursors—the Apollo, Mercury, Gemini, and X-15 vehicles—were fundamentally experimental and, therefore, dangerous to fly. Put simply, career astronauts accept that their work is inherently risky. A commercial spaceliner carrying paying civilian passengers is a wholly different beast. “We’re putting our family and friends on board,” says Whitesides. “I’m going to fly on it, and my wife is going to fly on it. So safety is paramount. And as a newer company, it’s even more important that we get it right.” Start by assembling a team of safety specialists with diverse expertise recruited from established aerospace firms, such as Scaled Composites and its offshoot The Spaceship Company, which is building Virgin Galactic’s fleet. “We know we have to create a vehicle that’s safer than any other in history, because we won’t have a business if we don’t.” Creating a spaceline is unprecedented, but don’t ignore precedent, advises Whitesides: “Decades of aerospace-safety lessons at NASA can teach you a lot of good stuff.”

STEP FOUR: BECOME A REGULATORY NINJA
Going where no one has gone before means trailblazing a regulatory jungle that even the gatekeepers themselves don’t fully comprehend. So do what Whitesides did and become one of them. He joined the FAA’s Commercial Space Transportation Advisory Committee and served as chairman of the Reusable Launch Vehicle Development working group. Whitesides gained a masterful knowledge of the requirements that Virgin Galactic now must satisfy for its license and permits from the FAA and the U.S. State Department, which polices spaceflights under the International Traffic in Arms Regulations. “I could drone on about regulation for hours,” admits Whitesides. Another hint: Find a location to fly where few people live. Virgin Galactic operates from New Mexico’s Spaceport America, situated in a hardscrabble desert adjacent to the 3,200-square-mile White Sands Missile Range. “It certainly makes [regulations] easier being in a relatively remote place flying a fair distance from populated areas,” says Whitesides.

STEP FIVE: IT’S ROCKET SCIENCE, AFTER ALL
“In some respects, space development is a lot less advanced than people think,” surmises Whitesides. “You go to the movies and see space all over the place—huge antigravity rocket ships—but that stuff doesn’t really exist. Basically, we’re still using technologies invented 50 years ago.” Virgin Galactic intends to change that. But in doing so, it has set a high bar. When Branson formed the company nine years ago, he assured the world that flights would commence in 2008. Delays—nearly all related to technical and safety issues—resulted in inevitable setbacks. With SpaceShipTwo now in its final test-flight phase, the latest timetable sets passenger liftoff for 2014. The holdups haven’t surprised Whitesides. “To be honest, I foresaw most of what we’ve had to handle,” he says. “Any aerospace venture is hard and always takes more money and time than you think it will.” The trick is to stay focused and “keep an eye on the big picture. We’re doing something historic—moving humanity to the stars. It’s worth doing, but this is a challenging business.” Your very own spaceline is within reach. Just don’t forget that first step.