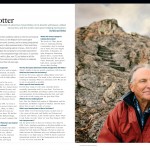 In this interview the founder of adventure travel dishes on his favorite wild places, oddest encounters, and the world’s next great trekking destinations. In 1967, Leo Le Bon led a group of Northern California clients on the first commercial trek in Nepal, and it was wildly successful. So the Belgium-born travel agent created a company offering even more exotic journeys, and in so doing jumpstarted a new kind of tourism: adventure travel. Le Bon pioneered treks in Tibet and China, the Andes and Greenland, and introduced walking safaris in Kenya—firsts for all of these countries. Mountain Travel Sobek, the company he co-founded (and retired from in 1990), still guides trekkers to the unexplored fringe: 160 trips to 72 countries are planned for 2009. We caught up with Le Bon, now 72, just before he left for Everest Base Camp last October, with his wife and a cadre of friends, to celebrate the anniversary of his inaugural journey there 40 years ago.

How did your first trek to Nepal get off the ground?
I put an ad in the Sierra Club Bulletin for a trek in Nepal—and got 100 replies in two weeks! Ultimately, 30 people signed up for what was the very first commercial trek in Nepal. It cost $400 per trekker, or $2,620 in 2008 dollars.

Where did you hike?
To go to Nepal in the mid-60s, you had to be on an expedition and a world-class mountaineer. There was no such thing as wandering off in the hills. So I tracked down Barry Bishop, the third American to summit Everest, and asked him to lead the trek with me. We went to Jomson in the Annapurna region. We went back in 1968 to lead the first trek to Everest Base Camp. Then, with Barry and Yosemite climber Allen Steck, I started Mountain Travel.

And it grew fast.
We immediately started expanding. In 1969, we went to the Bugaboos in Canada. We led treks across Corsica and ran climbs up the Matterhorn and Mt. Blanc. In 1980, I opened up China and Tibet, and within five years we were sending thousands of people over there. We did the first Omo River descents in Ethiopia for Richard Bangs, who started Sobek, another adventure travel company that Mountain Travel acquired in 1991.

Do you ever worry that the huge influx of Westerners you inspired has had a negative impact on indigenous cultures?
On the contrary: The adventure-travel industry has done tremendous things for all Third World mountain areas. We’ve improved education and health care, offered jobs, and engendered nonprofits such as the American Himalayan Foundation, which conducts large-scale assistance programs in places like Tibet and Nepal.

Where will climate change hit trekking the hardest?
The locals. In Tibet, glacial retreat is impacting farming communities—they’re running out of water and can’t irrigate their fields. In Khumbu, it’s quite dangerous. Retreating glaciers leave a natural basin behind them that fills up with water. Eventually, these glacial lakes burst, causing terrible down-valley flooding.

How has the typical adventure traveler changed since the 1960s?
Today’s trekker wants an upscale experience with less risk.

What has that meant for the industry?
In the last five years, agencies selling deluxe tours have joined our bandwagon. The result is that “adventure travel” is losing its meaning. What’s an adventure now? We just try to stay as grounded as possible.

What’s your all-time favorite trek?
Everest Base Camp. It’s the most culturally diverse, scenically spectacular trek I’ve ever done. You have an incredibly rich Buddhist and Sherpa culture with temples and monasteries, locals trading along the trail, and yaks with sacks of salt coming over the pass from Tibet.

Where’s the next trekking boom?
Iran. Also, the Hindu Kush region of Afghanistan, and the Karakoram and Baltoro regions in Pakistan. But first these places have to get a lot safer, of course.

What’s your favorite place to hike in the States?
Death Valley. I love the Eureka Dunes, tucked away in a far corner of the park, and Marble and Cottonwood Canyons. Also Havasu, in the Grand Canyon. That’s where I took Nadia, my wife, when we were first dating in 1983.

Any trips gone awry?
Oh, the press feeds on that sort of detail, don’t they? In 1986, I led a climbing expedition to Kashmir-Ladakh in the Himalaya to climb Sia Kangri, a 25,000-footer on terrain claimed by both India and Pakistan. We had to abort our climb because the Pakistani army was lobbing shells over the peaks to our high camp at 17,500! It almost caused an international incident, but I had tremendous luck in that no one was even scratched.