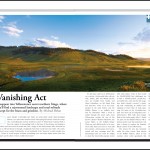 Disappear into Yellowstone’s secret northern fringe, store where you’ll find a rejuvenated landscape and total solitude (except for the bison and grizzlies).

Last night I pitched my tent at 8,500 feet atop the Buffalo Plateau, in a mile-wide meadow laced with spring-fed brooks. From the campsite, overlooking the remote northeast corner of Yellowstone National Park, I have the option of descending back to the base of the plateau and making a horseshoe end-run around its north side. But a ranger in the backcountry office had told me about an off-trail shortcut through a lodgepole burn that would save four miles. Of course, like most cross-country bushwhacks, it was debatable if the “shortcut” would actually save time. I knew it would require acrobatic scrambling over and under fallen timber. But who can pass up the allure of such a little-used route?

It’s late June and I’m in Yellowstone on a six-day, 40-plus-mile hike with my wife, Ashley, Jake and Wendy Jacobs, who are buddies from Seattle, and Hope Schmeltzer, an old friend from San Francisco. None of us has backpacked in the park before, and the Buffalo Plateau is an unlikely location for first-timers. With a week to amble through the iconic park, most Yellowstone rookies hit one of the known classics—Bechler Meadows, the Lamar Valley, or the Gallatin Range. These are each life-list treks, to be sure, but to hike them you have to wait until late summer—when passes aren’t snowbound and river crossings aren’t life-threatening—and you must be willing to share the deservedly popular routes with other hikers. None of that would do. Backpacker had challenged me to find a wildlife-packed, people-free, accessible trek—and one that the magazine hadn’t already covered, a daunting task considering its staffers have mapped no fewer than 43 trails spanning 353 miles in the 2.2-million-acre park (see them all at backpacker.com/yellowstone). With help from Dagan Klein in the backcountry office, I found my prize on the Buffalo Plateau with a point-to-point route that promised it all, plus a chance to explore the dramatic Black Canyon of the Yellowstone.

One reason the area has remained under the radar screen: Most photos of the Buffalo Plateau, taken in late summer, show ochre grasslands that suggest heat and dust. But we departed Hellroaring Creek trailhead last June, after a season of above-average snowfall had saturated the park. On the morning we started hiking, the sun shined brightly on a landscape transformed by the moisture, like all of Yellowstone had been treated with Miracle-Gro. Had I been drugged and blindfolded and then told I’d been delivered to the Mayo coast in western Ireland, I’d have had no trouble believing it.

Our plan was to follow the Buffalo Plateau Trail north, then link up with Hellroaring Creek and, turning west, end with a tour down the Black Canyon. After the first mile, we reached a suspension bridge that crosses the Yellowstone River, swollen with snowmelt, running milky and full. From the bridge, we faced a six-mile, 2,500-foot climb to our first camp on the plateau. The ascent was steep but not arduous; valley updrafts kept the air cool, in the mid-60s. Radiant meadows glowed a dozen shades of green and the trail, hidden beneath lush spring growth, varied from barely visible to entirely vanished.

We climbed through a minefield of glistening dung patties so fresh that bison must have moseyed by only an hour earlier. They also left behind fist-size clumps of fur that clung like Velcro to low-slung shrubs. By the time we set up camp in the high meadow, without having seen another backpacker all day, I knew we’d come to right place.

Even so, I’m prepared for the worst when we embark on that shortcut in the morning. It’s the only section of our route that passes through backcountry torched during the 1988 Yellowstone fires. And though the going is tough—we must balance on fallen and charred trunks, which frequently collapse underfoot—the reward is well worth the effort: The rejuvenated landscape amazes us. Thousands of lodgepole saplings have sprouted like a deep-wilderness Christmas tree farm. Wildflowers run amok—lupine, Indian paintbrush, bluebells, shooting stars, and forget-me-nots—in undulating rainbow bands. Sparrows nest in deadwood hollows, and the mounds of pocket gophers furrow the chocolate-hued topsoil. The ground itself bursts with water as brooks upwell through electric-green moss, like champagne bubbling to the surface.

The shortcut deposits us just beyond the park boundary. Wild chives fringe a shallow spring-fed pond, and I sample a handful before rejoining the established trail. After crossing muddy woodland, the path emerges on an exposed ridge that rises 1,000 feet above Hellroaring Creek, which flows so furiously that it vibrates the earth. We continue 3.2 miles to our second camp, an airy bench at the confluence of Hellroaring and Horse Creeks. We celebrate our last campfire (they’re prohibited along the remainder of our route) by stoking the flames and munching on squares of artisan dark chocolate that Ashley had secretly packed. After a 10-plus-mile day, it’s a moment to savor: The fire warms our faces, stars blaze overhead, and lightning flickers on the horizon.

The next morning, our route veers south along Hellroaring Creek, its banks flush with huckleberries just beginning to ripen. We’ve walked less than 500 yards when we glimpse a black bear at the base of a pine, pacing nervously. Suddenly, a beagle-size cub scurries up the trunk. We can hear its raspy, eerily human cries. The sow follows effortlessly into the treetop. But when we stick around snapping photos, mama scampers back down. Upsetting a bear that’s protecting a newborn ranks right up there with the all-time stupidest backcountry tricks, so we divert onto a slippery embankment that rejoins the trail downriver. Later, we recognize what’s left of an elk. Its remains are stripped clean except for inedible sinew; stamped in the mud nearby is the unmistakable paw print of a gray wolf.

The terrain changes abruptly on our third day. The forest thins, undergrowth recedes, and fragrant sage and juniper appear amid craggy outcrops of orange rock. It’s a classic high-desert landscape, and the last place I’d expect to encounter a grizzly. But at dusk that’s exactly what comes galumphing toward our campsite. After a frozen second, we realize that it doesn’t see us. The bellowing river and stiff breeze muddle its senses. Instant, unbridled hollering solves that problem. It perks its ears and then does an about-face, disappearing behind a furrow in the hillside. After the adrenaline clears my system, I’m reminded of the exceptional solitude we’ve found. It’s no exaggeration to say we’ve seen more bears (three) than other backpackers (zero).

We pitch our tents on a sandy shelf just a few feet above the river, where there’s a secluded beach. Wendy wades into the strong current for a dip, and plunges up to her neck in the frigid water. She doesn’t stay long. I opt to douse myself with water hauled ashore in a cooking pot. I’m still drying off with a Lilliputian camp towel when the storm strikes. I dive into my tent, where the spattering rain sounds like buckshot. We’ll stay two nights here and use the layover to explore the Black Canyon of the Yellowstone, and then on day six complete the final 4.2 miles to Blacktail Deer Creek trailhead, where we left a shuttle car.

Its eight miles from Crevice Lake through the Black Canyon to the terminus of the Yellowstone River Trail in Gardiner, Montana. We decide to dayhike halfway. Without a full pack, I feel weightless as we enter the chasm and descend through an increasingly desertlike landscape marked by prickly pear cactus and sagebrush lizards. The temperature pushes 80°F, which triggers tremendous snowmelt. A mile from camp, 15-foot-high Knowles Falls, on the Yellowstone River, firehoses over the drop. Farther west, the canyon narrows to the width of a freeway, funneling water into frothy rapids that catapult RV-size hunks of forest detritus and the occasional deer carcass downstream.

Walking silently, I scan the river valley for movement, hoping to spot more animals—bears or elk or bison. But if there’s one thing about Yellowstone—especially when it comes to wildlife—it’s that you should be careful what you wish for. At that moment, I unwittingly straddle a five-foot-long prairie rattlesnake coiled on the trail. It clacks its tail, then bluff-strikes right between my legs (yes, there)—at which point I shatter the Olympic long jump record.

When I breathe again, we’ve reached our lunch spot, a black-sand beach that wouldn’t look out of place ringing the shore of a Tahitian isle. The setting reminds me just how much we’ve seen in less than a week. We’ve fast-tracked nearly every Rocky Mountain ecosystem—subalpine meadows, montane forest, riparian valleys, and a desert biome. And for the final act, we’re treated to a slice of the park’s volcanic soul. With one night to go, I only have one concern about my first trek in Yellowstone: Where will I go on the second?