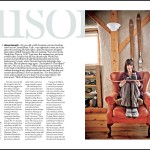 Alison Gannett, a 43-year-old world champion extreme freeskier who lives in Crested Butte, Colo., was supposed to meet me at her place this morning. But last night, a fast-moving storm dropped nine inches of fluff. Gannett calls at 9, panting. “Let’s meet at the North Face T-bar at 11:30.” I get there five minutes late, and wait awhile before I realize that she has already split. North Face accesses Crested Butte’s double-black-diamond and extreme backcountry terrain, where Gannett has been doing laps since first chair. My cell phone rings again. “I’m headed to Third Bowl,” she says. “See you in an hour.” After taking a few runs myself, I arrive back at the lift just as Gannett comes tearing through and—without slowing down—plops herself onto the next T-bar just as it rounds the bull wheel. I scoot on beside her. “I’ve lived here 20 years and just skied two new lines I’ve never done before,” she announces. “Both of them scared the hell out of me.”

Gannett cannot sit still. She swings her skis, fiddles with her goggles and fires off text messages from her iPhone. During the two days we’ll spend riding the lifts together, she never removes the pole straps from her wrists, like she might leap off should the lift stop for more than 30 seconds. It wouldn’t be her first time hucking a 50-footer. Though retired from competitive freeskiing (“I stopped after knee surgery No. 7”), Gannett leads ski-mountaineering expeditions. In 2001 she was among the first group to ski the northwest face of Hanuman Tibba, a 19,500-foot Himalayan peak. In Crested Butte, she teaches avalanche safety clinics and runs a steeps camp for women.

But what keeps Gannett in motion these days is her crusade to save snow from extinction. In 2004, Gannett launched her Global Cooling Tour to deliver an urgent message: Rising temperatures are destroying snowpacks, and without a fierce assault on climate change, the future of skiing is in doubt. “The forecast is bleak,” she warns. “We’re heading for a perilous situation. The concern is not just that our grandkids won’t be able to ski. It’s that we won’t be able to ski. In Europe, which is warming much faster, about half the ski areas are going to be out of business in the next few years.”

A stop on the Global Cooling Tour consists of a one-hour presentation with charts and graphs and scary statistics, along with thrilling videos of her ripping giant sheets of snow off remote peaks. Think Warren Miller meets An Inconvenient Truth. To date, Gannett has presented it more than 2,000 times in the U.S., and in Pakistan, Bolivia, Nicaragua, India, Austria, Canada, Mexico, Switzerland, El Salvador, Bhutan and Poland (“with lots of potato vodka and disco dancing,” she recalls). Resort managers, elected officials, universities, city planners and corporate executives have invited Gannett to speak. She also does shows for the general public at bars, community theaters and ski shops. “They’re not expecting to hear about global warming,” she says. “But I show them a crazy ski video of me in Alaska, and I’ve got their attention.”

Gannett’s foundation, Save Our Snow, educates schoolchildren about their carbon footprints. She is also on the board of the Equilibrium Fund, a nonprofit that fights deforestation and poverty by enabling communities in Central America and Mexico to cultivate Maya nut tree plantations. She researches and tracks the emissions improvements made by ski areas (e.g., Jackson Hole’s transportation footprint decreased 30 percent with the launch of a free public bus system). She works with the nonprofit Office for Resource Efficiency, which has partnered with Crested Butte and Gunnison Valley municipalities to transform the region into a showcase of sustainability. In February, Gannett traveled to Washington, D.C., to meet with Jon Wellinghoff, chairman of the Federal Energy Regulatory Commission. “One of my big goals is to influence policy change,” she says. And she was recruited by former Vice President Al Gore’s Climate Project, which trained 2,600 foot soldiers to present Gore’s now-legendary slideshow around the globe. “When I got there, I quickly realized I knew more than what they were doing,” says Gannett. “Now I’m training his trainers.”

Carbon dioxide is the greenhouse gas chiefly responsible for global warming—or global weirding, as Gannett prefers to call it, because our weather will become increasingly extreme as the planet heats up. “We’ll have super big snowstorms and super big droughts.” She insists that slashing our collective carbon footprint begins with individuals. She packs her talks with tips on how we can help and is relentless when it comes to ensuring that her own life is sustainable. “I don’t tell people how to be green, I show them,” says Gannett. “I try to inspire, not preach.”

I witness this when she invites me for dinner. Her house, built in 1997 in historic downtown Crested Butte, is a model of hyper efficiency. It’s framed with lumber harvested locally from dead timber stands. The external walls, 21 inches thick, are made from Colorado-grown straw encased in a stucco-like concoction of clay, horse manure, sand, flour and water. “It’s an old-fashioned European method,” says Gannett. The structure is virtually airtight, which helps keep it warm in winter and cool in summer. The paint and stain are nontoxic. There are solar photovoltaic panels on the roof and south-facing windows that nourish an indoor garden of romaine, spinach, cilantro, sage, broccoli, parsley, oregano, thyme, basil and carrots. The light bulbs are LEDs, which consume 10 times less energy than conventional incandescent and last almost 15 years. Parked in her driveway is an SUV with a hybrid-electric engine that gets 100 miles per gallon.

Gannett greets me at the door wearing shoes made from recycled plastic rice bags. She leads me upstairs into an airy kitchen, where the countertops are piled high with fresh vegetables—a weekly shipment she gets from a nearby farm co-op. Dinner is pizza made from scratch. While I sip merlot (a local vintage, of course, from Grand Junction) and watch her cook (a tornado of flour and ingredients), Gannett details her latest quest: a major overhaul of her diet to minimize its carbon impact. Whenever possible, she purchases food produced within 100 miles of Crested Butte. She makes cheese, renders lard and, for baking bread, buys whole-wheat and white flour in 50-pounds bags direct from a mill in Denver. Gannett lives with her boyfriend. The couple recently bought a pair of high-powered rifles. “We are going to build a log cabin in the backcountry and hunt elk for our meat,” she says.

Gannett grew up in Peterborough, N.H. Her father ran Crotched Mountain, a small ski hill about 30 minutes up the road from her house. When she was 18 months old, barely able to toddle, she made her first turns on skis. That first pair, just 50 centimeters long, is mounted above the stairs in her house. Gannett skied every day after school and started racing at age 11. But, she says, “I was an average athlete, and racing was too structured for me, so I was never very good at it. I was a math whiz—a brainiac, overweight kid who didn’t fit in with racing or other sports like soccer or volleyball. I was a dork.”

During the summer that followed her second year at the University of New Hampshire, Gannett decamped to Wyoming to work on a cattle ranch. “That was my first time out West, and I had an epiphany. I’d been studying engineering and business, but realized I wanted to work closely with the land and do something to save the world.” She switched majors and earned a bachelor’s degree in environmental science. Shortly before graduating in 1987, Gannett took a ski trip to Crested Butte and knew immediately she’d found her new hometown. “I discovered powder and freeskiing. And that’s when I really bloomed. I guess you could say I’m an adult-onset athlete.”

In 1995, her natural abilities got her noticed. While skiing with friends in Crested Butte on the Headwall (where organizers held the 2009 U.S. Extreme Freeskiing Championships), a scout asked Gannett to appear in a Warren Miller movie. Soon she was starring in films by Teton Gravity Research and Matchstick Productions—one of only a handful of women to do so. She also started entering freeskiing events. Over the next two years, she won championships in Argentina, Japan, the World Cup in Whistler, B.C., and the Triple Crown (skiing, snowboarding and telemarking) in Crested Butte. “Suddenly I was making a living as a freeskier.” Then in 1999, while competing at the Winter X Games in Crested Butte, Gannett overshot a landing from a 50-foot cliff. “I blew out both my knees,” she says. “When I heard my joints pop, I knew it was a season-ending injury—if not career-ending.”

Freeskiing had sidelined Gannett’s environmental ambitions. But when she got hurt, lucrative sponsors dropped her overnight, and that led to another epiphany: She could tackle global warming with the same passion, persistence and confidence she’d channeled into competing. “I had to do something to save all this,” says Gannett, sweeping her hand past a picture window in her living room that overlooks the Paradise Divide, the cirque that surrounds Crested Butte. “But I’m not a hippy-dippy, oovy-groovy, granola-eating environmentalist. I’m all about having a plan to reduce our carbon footprint 20 percent by 2020 and 80 percent by 2050. We have to get systematic about this. Methodical. We have to walk the talk.”

To that end, last year, instead of renting a car, Gannett completed a Global Cooling Tour of New England by bicycle. She did it again in April through several East Coast cities. She hitchhiked 100 miles to give her talk in Whistler and often turns down invitations if she can’t pair the air travel with other engagements. “I recently got a call from someone wanting me to speak at Cornell University,” she says. “I told them I could come in 2011, because that’s when I’ll be there for another event.” Jeremy Richardson, science advisor to Al Gore, says, “Alison’s approach is unique because she provides concrete examples of how everyone can do something to help the planet.”

Twelve years ago, Gannett’s carbon footprint was 20 tons a year, the national average. Today, it’s eight. “My goal is to get it to two,” she says, pushing away her plate and looking out the window at the peaks she skis every day. Her nose and forehead are still dusted with flour. “Because if we really want to save our snow, it’s going to take more than just living in a straw bale house and recycling. It’s going to take a dramatic shift in our lives.”

Posted in Articles and tagged with Ski. RSS 2.0 feed.