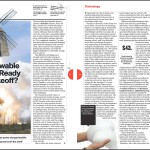 The first thing Dax Kepshire shows a visitor to SustainX is foam. When he flips a switch on a 10-foot-tall assemblage of pneumatic tubes and mesh screens, the machine starts spewing a creamy white goo that resembles soft- serve ice cream into a 300-gallon plastic tub. In a few minutes the foam is 3 feet deep, and Kepshire plunges his hand in. “It’s completely nontoxic,” he says, and derived from an industrial foaming agent found in shampoo and carwash soap. The seven-year-old company is betting the substance can solve the biggest challenge for renewable energy: how to store it.

The difficulty of holding on to enough wind and solar energy to power a city remains an obstacle to?the commercial viability of renewables. Because excess electricity from wind farms or solar panels can’t easily be saved, utility companies can’t rely on them when the wind stops blowing or the sun goes down. In the race to develop commercial storage systems that can meet utility-scale demand, SustainX is up against technologies that include powerful but short-lived batteries. Kepshire, a vice president and general manager at Seabrook (N.H.)-based SustainX, says the foam his company creates can help effectively store power at the scale needed to keep cities humming.

The SustainX system relies on compressed-air energy storage, a technology that has been tested on and?off for decades with mixed results. The idea is to save surplus electricity by using it to drive an air compressor, keep the compressed air in tanks or underground, and then tap it at will to spin electricity-generating turbines. The problem with this approach is temperature control. Compression superheats air, while decompressing?it makes it very cold, and the swings result in a lot of wasted energy. (The heat also threatens to explode a compressor’s cylinders.) The world’s only two operational compressed-air facilities, built decades ago in Alabama and Germany, require the use of natural gas as an external fuel source to stabilize air temperatures—raising costs and defeating the purpose of using clean energy.

That’s where the foam comes in. Injecting it into the air being com- pressed helps keep the temperature almost stable (at about 122F), as the foam absorbs excess heat, like a Styrofoam coffee cup.

Kepshire’s discovery of the foam was an accident. In 2006 he was pursuing his Ph.D. in engineering at Dartmouth College when he and fellow student Ben Bollinger sketched out plans for a water-cooled air-compression system for renewable energy, aided by Charles Hutchinson, the dean of their engineering school, and Troy McBride, at the time a professor of physics?and engineering at Elizabethtown College in Pennsylvania. They founded SustainX the following year: “We raised venture capital right out of the gate— all from a napkin idea,” Kepshire says. They hit a wall in 2009, as their proto- type proved ineffective beyond small trials. They added anticorrosive and disinfectant chemicals to the water to reduce wear on their machinery and to kill bacteria and algae, and the mixture began to foam up. SustainX tried to figure out how to stop that from happening, until engineers noticed that the foam was preventing the wild temperature swings.

At that point, the SustainX system could store about two days worth?of juice for the average U.S. house- hold. The company’s latest proto-?type, modified from a marine diesel engine typically used on cruise ships, uses foam throughout and feeds com- pressed air into 84 steel tanks housed in a 6,000-square-foot warehouse. The setup stores enough air to produce as much as 1,500 kilowatt-hours of electricity, and power 50 typical house- holds for a day. “Like any development, there are always some tweaks to make,” says Stephen Brown, the company’s vice president for engineering. Upgrades to various seals and valves last month have bumped up the system’s efficiency, meaning the ratio of its useful power output to total power input, to 54 percent, he says.

When investing in storage for electricity from any fuel, renewable or otherwise, “most utilities would like to see 70 to 80 percent efficiency before it really becomes worthwhile to them,” says Haresh Kamath, who manages?the storage program at the nonprofit Electric Power Research Institute. Some of the recently invented grid- scale batteries that have already hit the market are close?to 90 percent. But such batteries are expensive, Kamath says, and their life span is short—about five years compared with the more than 20 estimated for compressed-air systems. “Dollar per kilowatt-hour, compressed air will be cheaper than batteries,” Kamath says. “It seems to be one of the most cost-effective ways to store large amounts of energy for significant periods of time.”

SustainX has raised $43 million in funding, including grants from the?U.S. Department of Defense and the National Science Foundation as well?as venture capital from firms such?as Polaris Partners and RockPort Capital Partners. LightSail Energy, its closest competitor, founded in 2009, has raised $42 million from Bill Gates and other investors to develop its water-cooled compressed-air storage system. Able to produce about 250 kw of power, LightSail’s prototype is small, but co-founder and chief scientist Danielle Fong says it has attained 50 percent efficiency and will eventually outperform SustainX. “I’m telling you this not because I’m trying to diss the competitors,” she says. But “they have been tailing us from an idea stand- point for a very long time.” Technical problems forced LightSail to abandon a pilot program at a Texas wind farm last year. “The objective now is to have something operating in the field by early 2016,” Fong says. Anissa Dehamna, an analyst at Navigant Research, says she’s impressed with both companies.

“SustainX and LightSail are achieving important milestones,” says Dehamna, who calls compressed air “a very compelling, very elegant solution” to energy storage and estimates that the industry’s revenue will rise to $1.6 billion by 2018 from $37 million last year. “Their fuel is free, a lot of their equipment is off-the-shelf … and it’s pretty easy to get financing.” She also notes that the two companies are developing site-specific units, allowing utility customers to place storage next to a wind farm or wherever it’s needed. That’s an important advantage over the earlier compressed-air storage experiments in Alabama and Germany.

Like LightSail, SustainX has struggled to launch a commercial pilot. “The market development has been slower than everyone expected,” Kepshire says. His company is now finalizing partnerships in the U.S., China, Japan, and South Korea to build its first commercial installations, which he says can produce about 1.5 megawatts of electricity, about what 15,000 incandescent lightbulbs consume in 40 minutes. To add more power, utilities can simply buy more air-storage tanks. SustainX also continues to tweak its foam formula. “We’re reengineering and fine-tuning it,” says Kepshire. “It’s our secret sauce.”