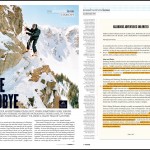 This wasn’t always the case. “I recall many large outfits not using waivers in the early seventies,” says Reb Gregg, a Houston-based attorney who lectures about recreational liability. So how did things get so contentious? To find out, we constructed an abridged sample waiver using language from the contracts of a few leading outfitters, then dug up the lawsuits that prompted the bombproof legalese. The result is a look at 50 years of ski accidents, shark attacks, rafting mishaps, and negligent guides. Read on—then sign at your own risk.

1. You are voluntarily forgoing the right to sue for negligence. The legal precedent dates to 1963 and a case involving a patient who, after signing a liability waiver, accused doctors at a Los Angeles hospital of malpractice. The California Supreme Court ruled that hospitals, being of “great importance to the public,” could not be absolved of negligence. But the court delineated exceptions to this rule—voluntary transactions in which clients can “prerelease” an organization from negligence. Outdoor recreation falls into this category.

2. Whitewater is bumpy. Seems obvious, right? Not to Denise Madsen. She sued Wyoming River Trips in 1999 after bonking heads with another passenger in her raft. She settled for an undisclosed amount when the court ruled in her favor, deciding that being “jostled about” wasn’t necessarily an inherent rafting risk. As a result of this and other cases, new language is included in waivers to ensure you know that whitewater might leave you “shaken.”

3. In August 1987, Robert Goldstein, a Procter & Gamble executive, drowned along with four others when their raft flipped during a five day fishing trip on the Chilko River in British Columbia. Goldstein’s wife argued that the release her husband signed had not contained adequate descriptions of the trip’s risks, and she received an undisclosed sum that was reportedly one of the largest settlements in the history of outdoor recreation. Whitewater outfitters gave waivers a major makeover to cover every conceivable rafting injury.

4. Suing an outfitter for an act of God—what lawyers prefer to describe as an “inherent risk”—is a long shot. “An organization has no duty to protect a client from inherent risks,” says Gregg. “But it may be liable if it enlarges those risks.” Because of that loophole, such suits abound: In 1999, Peter Terbush was killed by a rockslide while climbing in Yosemite National Park. His family claimed the park was responsible for creating unsafe conditions and failing to post adequate warnings. A jury dismissed the case. Still, because of suits like this, attorneys regularly add new hazards to the list of natural occurrences.

5. In December 1987, Katherine Voight was separated from her guide while hiking near Loveland Pass, Colorado. She was rescued the next morning but lost all of her toes to frostbite. A jury ultimately awarded Voight $420,000, saying her guide had done a poor job of monitoring the hikers. But it also acknowledged that Voight was at fault for failing to properly clothe and nourish herself. The result is this language, which means that even if you go hiking with a guide, you have to be able to fend for yourself.

6. Every “dangerous obstacle” is cited for a reason: somebody attempted to sue based on one or more of them. This litany of perils is derived mostly from lawsuits involving resorts—inbound deaths from tree impacts and collisions with other natural mountain hazards, which kill some 50 skiers a year.

7. If you insist on a high DIN setting—how tight your bindings are adjusted—and get injured in a slide because you can’t release your boot from your ski, tough hooey. Knutson recently defended just such a case—a nonfatal heli-skiing accident in Valdez, Alaska. The victim was worried he’d lose a ski on the steeps. “This is very common,” Knutson says, “cranking down the bindings so they don’t release.”

8. Carsickness is a common malady among safari clients. Though there are no known examples of clients suing outfitters for suffering from it, safari companies keep this language in their waivers so clients don’t file suit when they’re puking instead of spotting lions and zebras.

9. If an animal attacks, you have little legal recourse. The precedent dates to 1976, when a shark injured 13-year-old Robert Wamser while he was swimming near St. Petersburg, Florida. His father sued the city and lost. The court said it was absurd to hold St. Petersburg responsible for damages caused by a wild creature in its natural habitat.

10. This language is precautionary: no suits have resulted from safari guides being attacked by guerrillas, but many travel outfitters operate in countries that can quickly become unstable—like, say, Egypt. 11. In June 2000, Eve Jaffe died of a brain hemorrhage while participating in the 330-mile AIDS Ride from Raleigh, North Carolina, to Washington, D.C. Her estate sued the race organizers for not providing proper medical monitoring along the route. The case was dismissed, but waivers are now unequivocal: if you get injured, outfitters can’t guarantee immediate medical treatment.

12. This clause can protect even ill-advised decisions. Consider the case of David Stroud, who died in July 1995 while rafting Colorado’s Arkansas River. The outfitter, River Runners Ltd., knew that the abnormally fast rapids had killed several people in previous weeks. River Runners proceeded anyway, issuing a poorly fitting life vest to Stroud, who weighed 350 pounds. When his raft flipped in a Class III rapid, Stroud lost his vest and drowned. His estate sued and lost because he’d signed the release.

13. You can’t sue for “negligence,” but you can for “gross negligence.” What’s the difference? As Knutson puts it, “Gross negligence has to be something that’s reckless and damn near intentional.” Example: In July 1993, Loren Hatch went bungee jumping at a fair in St. Louis. The fair operator attached the bungee to Hatch’s waist and ankles but forgot to affix the other end to the jumping platform. Hatch leaped from 170 feet and slammed into a safety airbag, injuring his back, legs, and shoulders. A jury awarded him $5 million.

14. Sue an outfitter and you have to pay their legal costs. Win and the court might order the outfitter to reimburse you (no guarantees); lose and you’re definitely out a hefty sum.

15. In February 2002, Gary Poppleton went climbing at a gym in Portsmouth, England. House rules were posted, but Poppleton never read them. Had he done so, he would have known not to leap from one wall to another. He landed on his head, leaving him a quadriplegic. Poppleton sued and lost; the court called his maneuver “dangerous and foolhardy.” This clause says that you acknowledge reading the waiver—even if you haven’t.