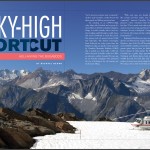 I’m standing on an 8,000-foot-high rocky ridge with Grisedale and a group of a dozen hikers in British Columbia’s Bugaboo Range. It would normally take at least two days trudging uphill through wooded slopes and across snowfields to reach this perch. Our journey took six minutes aboard a Bell 212 helicopter. The brawny twin-engine beast delivered our entire posse from the Bugaboo Lodge, an upscale retreat operated by Canadian Mountain Holidays (CMH) that is tucked in a lush valley 3,100 feet below the peak. Grisedale works for CMH, an adventure outfitter founded 50 years ago by an Austrian immigrant who pioneered the use of helicopters for ski touring and backcountry hiking.

“With each step, you should inhale like normal and then empty your lungs completely,” instructs Grisedale. He has planned a short orientation hike for our first day. “This is much easier than trying to suck in tons of air in big, rapid bursts.” The technique, he says, is foolproof. “I taught it to a 94-year-old woman and she could go for hours up here.”

Beginning 50 million years ago, creeping glaciers and subterranean magma forged the Bugaboos, part of the Purcell Mountains in eastern British Columbia, renowned for their granite spires that jut from ice fields like Doric columns of white marble. We follow Grisedale up a gentle ridge opposite the Northpost and Brenta Spires, both nearly 10,000 feet tall. It’s early July and hefty patches of winter snow remain along the trail.

We tramp across a slick swath while another guide, Paul Lazarski, demonstrates how to kick boot steps into the slush and use trekking poles to steady ourselves. There are plenty of questions from the group. A couple from Calgary who are here to celebrate their 35th anniversary want to know if they can renew their wedding vows on a mountaintop. Someone else asks how to descend a talus of loose shale. Another hiker wonders if lightning is a threat (answer: yes). Laurie Hathorn, 55, who owns a real estate company in White Plains, New York, is worried about scorpions and snakes. Grisedale assures her it’s too cold for such critters. “Before this trip, I hadn’t been alpine hiking,” she confesses. Her boyfriend, Dave Jenks, 66, is built like a bank vault. “I’ve never done anything like this,” he admits. “No hiking, no wilderness experience—so this is really a first.”

I feel guilty relishing the 360-degree views of the Bugaboos’ famed spires, knowing I kind of cheated to see them. Then I remind myself that this is heli-hiking. The point isn’t to prove wilderness prowess and physical endurance, it’s to experience an alpine buffet as part-time mountaineer, sampling scenery rarely beheld and largely inaccessible. Plus, when the weather turns grim, you don’t have to pitch tents in the drizzle and spend long, cold nights shivering on hard ground. When a squall appears across the valley, Grisedale promptly radios our pilot, and soon the telltale thump-bump of chopper blades slices through rarified air. The helicopter plops onto a meadow and we pile in. Fifteen minutes later I’m at the lodge sipping a cocktail in the rooftop hot tub. Menacing clouds have shrouded the surrounding summits, and it begins to rain as I sink deeper into the steamy water.

Whirlpool, sauna, daily yoga
In the morning, the guides divide us into two groups based on skill level. I’m on the “fast” team with Lazarski, a human Wikipedia of mountaineering who, as we walk, identifies a dozen different wildflowers, deconstructs the behavioral psychology of grizzly bears, explains plate tectonics and glacial mechanics, and recounts the complete 50-year time line of alpine climbing in the Bugaboos. The constant chatter distracts us from tough terrain: We’re traversing a 30-degree slope 1,000 feet above a fast-moving river called Chalice Creek. To keep from slipping, we grasp roots and stones. At one point, we skirt below the base of a cliff that spurts springwater from crevices in the rock. I fill my canteen from a trickle and take a swig. Delicious. Eventually, at 7,200 feet, the route rises above the tree line and spits us onto a moraine—a mound of debris left by a glacier. We follow the moraine toward Chalice Creek, where Lazarski notes the conspicuous absence of ice. It’s easy to see the impact of climate change: Lazarski has been tracking glacial retreat and tells us that just a few years ago we would have been standing on frozen ground.

When CMH founder Hans Gmoser arrived in Canada from Austria in the early 1950s, he wasn’t worried about receding glaciers. All Gmoser could think about was how to scrape together enough money to spend his life in the mountains. He worked odd jobs in Calgary and eventually saved enough to start a small guiding outfit. In 1965, CMH became the first tour operator to transport skiers aboard helicopters. Business boomed, Gmoser built the Bugaboo Lodge, and in 1978 he began offering heli-hiking. Today the company runs more than 60 heli-hiking tours every summer and operates six lodges throughout British Columbia, each with its own dedicated helicopter. The Bugaboo Lodge, where I’m staying, is the largest, accommodating up to 44 guests and offering a bar, whirlpool, sauna, on-site masseuse, daily yoga, game room, gift shop, and 50-foot-tall indoor climbing wall.

It’s hard to know precisely how the massive operation impacts the fragile mountain environs, but CMH works diligently to offset its carbon and human footprints. The company implemented an elaborate sustainability program that includes everything from building a very small-scale hydro plant for generating clean electricity to conducting “trampling studies” that assess how foot traffic affects fragile alpine vegetation.

Dodging wind and rain
Lazarski reminds us not to get too comfortable. The arduous terrain we’ve been scaling will continue for a couple more miles, but there’s a payoff: “A foot soak,” promises Lazarski, “in Eva Lake.” We push onward, picking our way through sparse forest and scree fields. At one point, we find ourselves walking into a headwind next to a noisy, rushing creek. “In these conditions, the grizzlies can’t smell us or hear us coming,” he says. Grizzlies will generally keep their distance if they know you’re around. But when startled, they sometimes charge. Every few hundred yards, Lazarski whacks his trekking pole against a boulder to alert any lurking bears of our presence.

Eventually we join a faint game trail blazed by local elk and mountain goats. It’s mostly barren except for the occasional tuft of moss campion frosted with clusters of tiny magenta flowers. At a vantage point I survey the valley and spot the narrow ledge where we began hiking five hours earlier. We’ve covered an impressive distance over what appears to be virtually impassable terrain. Lazarski informs us that we’re only the third group of hikers ever to have trekked this route. “We’d seen the hike from the helicopter but never thought it was possible until we scouted it on foot,” he says. “From afar, it always looked too steep and too exposed.” I agree: Had we flown over beforehand, I would have chickened out.

We continue along a ridge for another mile and then drop into a shallow basin to reach Eva Lake. I yank off my boots and socks, and dunk my legs into the icy water. It’s painfully cold and elicits hoots and howls from others who take the plunge, but five minutes later our feet are renewed. Heavy clouds descend on the lake, and Lazarski radios our pilot to ensure we get out before the rain. A moment later, the helicopter appears.

On Day 3, my last in the Bugaboos, Grisedale will be our guide, and he urges us to gorge at breakfast—scrambled eggs, bacon, potatoes, granola, yogurt, fruit, and homemade bread—no skimping, seconds for everyone.

I’m still stuffed when the helicopter drops us on a 9,000-foothigh saddle where a smooth, easygoing path leapfrogs from ridge to ridge. A relentless, frigid wind blasts from the north, and after four miles of getting scoured, Grisedale has had enough: “We’re making a detour to get out of this wind,” he announces. He leads us into an adjacent valley that’s in full bloom, a continuous undulating sheath of yellow and pink and purple wildflowers.

By keeping to the lee side of ridgelines and dropping into the forest wherever possible, we avoid the wind for the rest of the day. It’s warmer and soon everyone falls single file into a swift rhythm, covering eight miles in about two hours. But the afternoon showers threaten again. This time our pilot anticipated the change in the weather: We crest a knoll called Powder Pig Bump to find him waiting in the helicopter, reading a book in the cockpit. He spots us approaching and waves us inside. The engine groans. The blades spin. We rise, slowly at first, then faster, and the Bugaboos shrink beneath me for the last time.

Posted in Articles and tagged with Rosebud. RSS 2.0 feed.