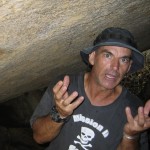 For more than a decade, American Robert Graf has combed the waters of a Seychelles island for a multimillion-dollar booty stashed by pirates nearly 300 years ago.

I’ve been treading water in a small, man-made lagoon for about half an hour, waiting for Robert Graf to surface. The 49-year-old American treasure hunter has cordoned off this rectangular swath of Indian Ocean in the Seychelles, and now he’s somewhere 25 feet below, chiseling off chunks of granite and sucking up sand and grit with a four-inch-wide vacuum dredge. He’s searching for the entrance to a stone vault that he believes contains a pirate hoard—part of what many consider the largest high-seas heist in history—stashed nearly 300 years ago. Back then, locals speculate, the area where we’re swimming was dry land, the sea held back by a sand berm later destroyed in a storm.

Graf, a former U.S. Air Force technical instructor, breathes through a 50-foot-long bright pink hose attached to an air tank on shore. He wears a face mask, a tattered wet suit and 26 pounds of lead weight strapped to his waist. Every so often I dunk my head, peering through my mask into impossibly blue water. At one point a faint shadow glides over the bottom, then vanishes into a dark ravine. Moments later there’s a creepy scraping sound, like someone prying open the lid of a sarcophagus.

Graf pops up on the other side of the lagoon. “I have maybe three or four feet to go,” he shouts. “But I’m running out of air.” The noise I heard was Graf trying to move several granite slabs, which he says appear to have been hewn by hand and stacked in a kind of capstone. He’ll be back again tomorrow with a fresh air tank, and the day after that too. Off and on for 15 years he has been hauling up stone and sand in search of the prize he’s confident lies beneath the waters of this rocky beach on Mahé, the largest of the 115 granitic and coralline islands that form the Seychelles.

Historians believe that cached somewhere in this far-flung archipelago are the plunders of Olivier Le Vasseur, aka La Buse, or the Buzzard, a French pirate who roamed the Indian Ocean during the early 1700s. In 1721, La Buse, along with English pirate John Taylor and their crews, ransacked the Nossa Senhora do Cabo, a Portuguese frigate undergoing repairs near Mauritius, about 1,000 miles south of the Seychelles. The Cabo carried gold, uncut diamonds and church regalia belonging to the retiring viceroy of Goa. At the time, Goa was a Portuguese colony on the west coast of present-day India. La Buse and Taylor made off with the treasure—then valued at more than a million pounds sterling—and divided the spoils. Most of La Buse’s considerable fortune, says Frank Sherry, author of Raiders and Rebels: The Golden Age of Piracy, came from his capture of the Cabo. French authorities caught up with La Buse a few years later near Réunion, a rugged volcanic island south of Mauritius. In 1730, as he was about to face the gallows there, the pirate is said to have tossed a sheaf of papers into the crowd, taunting his audience with these final words: “My treasure to he who can understand.”

When I arrive on Mahé, it’s easy to spot Graf in the crowd at the airport. He’s the only guy wearing a T-shirt emblazoned with the classic pirate ensign—a skull and crossbones. Tanned and fit, the treasure hunter seems relaxed—hardly what you’d expect from someone who has spent a third of his life obsessed with a long-dead pirate. Yet Graf is no laid-back islander. He’s in-your-face intense right from the start. I’d barely heaved my suitcase into the trunk of his rusty compact car when he launched into a breathless retelling of how he’d voyaged some 10,000 miles from his Colorado home, married a Seychellois hotel reservations manager and spent more than $450,000 of his own money looking for a treasure that others have failed to find here for nearly a century.

“In 1923 a rare storm came through the Seychelles,” Graf says as we wind through the streets of the capital, Victoria. “It eroded many of the beaches.” One particular beach was in Mahé near the home of Rose Savy, a local landowner. Thrashing wind and waves had exposed boulders on her property with mysterious markings. According to one version of the story, Savy wrote her nephew, who worked at the national archives in Réunion, with news of the discovery. He thought the markings might be related to a set of 200-year-old papers kept in the archives—the papers, it’s believed, that La Buse had flung at the crowd before his execution. The nephew sent the papers to Savy. There was a cryptogram and four letters, each thought to offer different clues to the treasure.

Graf, who moved to Mahé in 1984 to manage a satellite-tracking station for a U.S. defense contractor, first learned about La Buse from a magazine article. By then copies of the La Buse papers were in the hands of another treasure hunter, John Cruise-Wilkins, who was resuming work started by his father, Reginald, a British soldier who’d acquired the papers in 1949 from Rose Savy and squandered 27 years looking for the treasure.

Graf agreed to help fund Cruise-Wilkins’ project, and the two toiled together in the rocks for four years before Graf broke with his partner over where to search. “Cruise-Wilkins gave me copies of the papers,” recalls Graf, “and told me to figure it out for myself.” Graf then negotiated an exclusive agreement with the Seychelles government to dig on his own, which he did until 1998, when a license to continue was given to Cruise-Wilkins for two years. In April 2003, Graf once again obtained permission to dig.

Graf says he narrowed his search by trying to reconcile the La Buse papers with the markings on the rocks, which led him to the spot where he constructed his lagoon. “I tried to get into the mind-set of the pirates,” he says. “I had this dream, and every single morning for two or three weeks I’d wake up wondering ‘What does this single dot on the rocks mean?'” There were dozens of similarly puzzling clues. La Buse had advised readers to be “fixed by the ecliptic plan,” and also wrote: “Let Jason be your guide and the third circle will be open to you.”

Kevin Rushby, author of Hunting Pirate Heaven: In Search of the Lost Pirate Utopias of the Indian Ocean, told me that the Seychelles aren’t the only place people are seeking La Buse’s stash. “Treasure hunters have been scouring Réunion for the treasure for years,” he says. “They even sacrifice chickens on his grave there.”

Graf isn’t daunted. At his excavation site on Mahé, we scramble over weathered boulders that jut from the beach like giant stone fingers. He points out at least two dozen carvings and symbols etched into the rocks. Each of these markings, Graf takes pains to explain, is related to a comment in La Buse’s writings. Later, for four hours back at my hotel, he shows me PowerPoint slides on his laptop, including aerial photographs of the excavation site. One picture, he says, reveals a sequence of seemingly random holes that mirrors a constellation of stars referred to in one of the letters. That’s not the only evidence he might be on the right track. Years ago, Reginald Cruise-Wilkins had found a domino with handmade inlays showing a six and a two not far from the place where Graf is now digging. La Buse’s papers, it turns out, contain a reference to the number 62.

Today it’s thought that La Buse’s share of the Cabo heist could be worth $200 million, but Graf says that figure varies depending on who you talk to. He’s heard sums as high as $500 million. “But even if it’s only $5 million,” he says, “that’s still a lot of money.” Though under Seychelles law, he tells me, half of any earnings must go to the government. Yet time is running out. Graf’s excavation permit is due to expire in April 2005, and Cruise-Wilkins is standing by, ready for a third assault. “I know what we have to do, and it will be pretty fast,” says Cruise-Wilkins, whose home is just down the road from the excavation site. “I was working on a tight budget, but now I have the funding. Graf was supposed to move out and I was supposed to take over on October 1, but the government’s technical adviser visited the site and gave him six more months.” Cruise-Wilkins says that his former partner, now rival, is merely stalling and will run out of time before finding the treasure.

As Graf and I stood at the edge of his lagoon after a dive, he insisted that he was closer than ever to a narrow channel that he says will lead him to the vault that La Buse alludes to in his papers. It’ll require just ten days of dredging to reach the vault’s entrance, he claims. And what if it takes longer?

When I telephone Graf a few weeks after returning to the States, he tells me that the ceiling of the so-called channel has begun to collapse. He’ll have to dig out part of the ceiling to prevent a cave-in—a setback that will cost him at least a couple of more months. In the meantime, he’ll have to persuade his wife to hold out a bit longer. “She’s sick of it,” he says. “She wants to go to the States so I can take a 9-to-5 job. But I won’t do it. I’ve got five different letters that point to the same spot. The treasure has been sitting there for 300 years, and I’ve only got a couple of feet to go.”

Later, getting ready to leave the island, I tell Graf that his story is a bit hard to believe. Then again, by now I’ve learned that to be a treasure hunter—to slog away for years in the heat, grit and grime—takes a certain amount of blind optimism. As he starts to drive off, Graf pokes his head out the car window and shouts: “You’ll believe me when the treasure comes out of the ground!” Optimism perhaps—or maybe just pirate fever.

Posted in Articles and tagged with Smithsonian. RSS 2.0 feed.