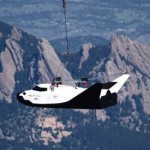 My house is visible in the backdrop of the opening spread for my Air & Space magazine story on Sierra Nevada’s Dream Chaser spaceplane. I’ve been covering NASA and aerospace for many years, and my assignments almost always require trips to Cape Canaveral, Florida—where it rains whenever I go—or the Johnson Space Center in Houston, where I sweat too much. I relished the commute for reporting the Dream Chaser story: Sierra Nevada is building what might become the next Space Shuttle in a warehouse just 15 minutes from Boulder; the first test flights took place directly over town. Dream Chaser is a spaceplane that’s competing against traditional capsule designs for the next big NASA contract to ferry astronauts into orbit. Capsules are cheaper to make and favored by NASA for their simplicity and reliability. But I don’t like them. What fun is a capsule? If we’re ever to become a spacefaring society, we need to move beyond ballistic thinking and toward actual spaceships that can fly (or propel themselves) through the cosmos. I’ve seen every minute of every Star Trek episode, film, franchise, and spinoff made, and capsules rarely make an appearance unless someone is using one to flee a disabled, about-to-implode starship. Write your congressperson: No more capsules.