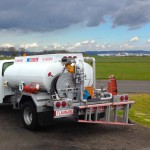 As so often happens, the idea for a new story surfaces while reporting another. While on-assignment in California with the crew of the Missing Aircraft Search Team (you can read that story here) I had been exchanging emails with Jim Herd, and engineer and pilot who has been flying since 1981 and is a prolific contributor to online aviation forums. We somehow got on the subject of my next big story and Jim wrote: “The demise of leaded avgas [aviation gasoline] is the next shoe that will drop. It is already such a threat that it is seriously impeding progress and confidence. There is no hard plan yet, but lead will probably be mandated out in less than 10 years—and so far, unlike with autos, there is no clear solution.” Bingo. That was back in December 2010. Behold “Something in the Air,” my report for OnEarth’s Fall 2013 issue, which investigates the lead pollution poisoning communities—and particularly children—situated near general aviation airports. Like the residents I interviewed, I, too, initially had no idea that airplanes still burned leaded fuel. And, moreover, that they were burning enough of it to seriously impact the health of children living in proximity—about a mile or two—from an airport. It’s a complicated dilemma, pitting, as you might expect, corporate interests (aviation) against the health and wellbeing of the rest of us. But lead has to go, sooner than later. Sooner, I believer, will require new legislation to outlaw leaded avgas and force a changeover to safer alternatives.