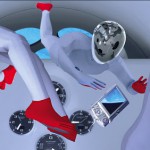 I’ve lost count of how many articles I’ve written on Virgin Galactic—five, maybe six perhaps? What can I say? A company trying to build the world’s first commercial spaceliner makes for good copy. My latest story is a cheeky take on how one might accomplish such a seemingly outrageous feat. I’ll admit that in 2004 when Virgin founder Richard Branson first announced his intent to hurl tourists into space inside privately built rocket ships, my first thought was, “What’s he smoking?” But Branson and crew have made me a believer. Yes, there have been delays, setbacks, and even an explosion in 2007 that killed three—this is rocket science, after all. Despite endless hurdles, the Virgin team has persisted to where they are now a few months away from their first flights. I’m not a big fan of Versions 1.0, especially when it comes to flying bombs. But give a couple of years—and a few dozen successful flights—and you might get me onboard. I’ve already done the training; now I just need a ticket. Donations accepted.