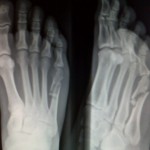 In September, Men’s Health published “Barefoot Backlash,” my second article, on barefoot/minimalist running. My first profiled Danny Abshire, founder of Newton Running. Both stories explore the theory that landing toward the front of your foot rather than on your heel makes you a more efficient runner and might prevent injuries. Both pieces also investigate whether less underfoot is better than plump soles that purportedly encourage us to slam the pavement heels-first, which can amplify impact forces, according to several studies. Personally, I think if you’re running and not getting hurt, you shouldn’t change a thing. My Newtons used to make my calves agonizingly sore because I was forcing myself to land on my forefoot—something I’d been told was a more “natural” gait. When I finally stopped thinking about form and let my feet land where they wanted, the soreness vanished.

“Barefoot Backlash” explores whether the barefoot running phenomena has been misappropriated, precipitating a sudden uptick in injuries. Confession: I’d never run barefoot until taking on this assignment. After coaching from experts, I did a mile-long jog around our neighborhood. I’ll admit, the sensation was liberating. But I’m a trail runner, so prancing around unshod on cement isn’t a hobby I intend to adopt. Once was enough. That said, I’ve taken a couple long trail runs in minimalist shoes (no, they didn’t pay me), and the experience is levitating and, dare I say, feels natural—a dance, rather than a slog, through the woods. That’s in part because you have to concentrate so damn much to avoid impalement. Surprisingly, the klutz that I am, I’ve had no injuries, which means I’ll likely stick with it, at least until the snows arrive—or I lose a toe.