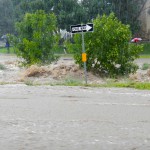 The first clue that something truly strange was going on came from a peep on my iPhone. “I need a wet-vac NOW,” a buddy across town texted shortly after 10 p.m. on September 11. “Seriously, anyone have one and is awake?” I did, in my garage, and offered it up. “I’ll be there in ten minutes,” he pinged back.

By now rain had been hammering Boulder, where I live, for 24 hours. This wasn’t one of the short-lived bursts typical of summer squalls on the Front Range. It was a steady, enveloping downpour. Weather usually rolls in swiftly and leaves just as hastily in the Rocky Mountains, carried from west to east by the fast-moving jet stream. So surely, I thought, the skies would clear by morning?

Then my friend showed up, and I knew something was different about this storm. Normally unflappable, he was wild-eyed and borderline manic. Creeks were bursting all over town, he said, and roads had turned into rivers. One newborn waterway was sluicing across his front lawn, drowning his basement. He grabbed my wet-vac and vanished into the soggy darkness. I should have gone back inside, but if the storm was truly as bad as he said … well, I had to see that for myself. I’m a weather geek: I studied meteorology in college, follow forecasting blogs, and track every major hurricane like fantasy football players scour the waiver wire. So I hopped in my truck and set out on a looky-loo jaunt. Not smart. I didn’t know it at the time, but I hit the road just as the storm was rapidly intensifying.

Atmospheric water vapor fed by the remnants of two tropical storms—one in the Gulf of Mexico and another in the Pacific Ocean—had already reached the highest level ever measured in Colorado for September, usually one of our driest months. At the same time, a stationary high-pressure system to the east and a deep low to the west had trapped all that moisture up against the Rocky Mountains. Powerful easterly winds forced the moisture upward, where it quickly condensed in the cooler air, resulting in last week’s deluge.

In Colorado, these “upslope” storms are typically small and don’t last long—because the conditions to generate them rarely align for more than 12 hours. But not this time. Instead, optimal conditions persisted for nearly a week across a vast area from central Colorado to the Wyoming border. That’s why some meteorologists have called “Superflood 2013” a millennial storm: in any given year, they say, there’s only a one-in-1,000 chance that the atmospheric variables would come together to produce a tempest of such magnitude. Rainfall totals from the National Oceanic and Atmospheric Administration’s Precipitation Frequency Data Server agree. The National Weather Service went a little more old school, dubbing the storm “biblical” but steering away from any timeframe categorization.

As I drove through town just after 11 p.m. on September 11, roads were going under fast. I saw open fields and vacant lots fill up like lakes and major streets inches deep in brown muck. I came across several folks watching six feet of water inundate one of the city’s bike paths. I stopped, took pictures, and listened to the otherworldly roar. Nobody spoke. Prairie dogs had been flushed from their burrows. They were wandering the roadways, too stunned to avoid oncoming traffic, and got flattened. I’ve been in Boulder eight years and never knew we had native crayfish. Now they were scampering across a jogging trail on the south side of town like panicked refugees.

My feet were soaked. In the rush to get out of the house, I had left wearing only slippers—and also neglected to bring a wallet or driver’s license. No matter. I headed toward Boulder Creek, where I knew there would be action. But washouts cut off any chance of a direct route. Then, shortly before midnight, a drainage ditch exploded near me. A mini-tsunami coursed into the street and surged beneath my SUV. For a few (long) seconds, my 5,400-pound Toyota 4Runner—which clears the ground by a foot—was afloat, bobbing above the pavement. When its tires finally made contact, I sped for home, disoriented and shaking.

I wasn’t the only weather geek knocked for a loop by the intensity of this storm. Joel Gratz, a local meteorologist who produces the website OpenSnow, has chased tornados across Oklahoma and studied every record flood in U.S. history. But, he told me, “I was scared, really scared” when, from an overpass, he watched Boulder Creek crest at 5,000 cubic feet per second (that’s about 30 times higher than its average flow rate), setting off flood sirens across town.

Everybody loves talking about the weather, and weather geeks even more so, so that’s pretty much all I’ve been doing in the days since my harrowing SUV experience. And what I’ve heard from some of the top experts in the country—many of whom are based here in Colorado, at places like NOAA’s Earth Systems Research Laboratory and the National Center for Atmospheric Research—has me even more concerned for the future.

Imagine: even the supercomputers got this one wrong. Boulder happens to be home base for one of the most sophisticated forecasting technologies in the country, NOAA’s High-Resolution Rapid Refresh model. This groundbreaking tool is designed to provide highly localized, short-term forecasts, which distinguishes it from conventional models that make predictions for large swaths of the country over several days (and is what your local seven-day TV news forecast is based on). HRRL can tell you what’s going to happen every 15 minutes, out to 24 hours, within a few square miles. Or at least it’s supposed to be able to tell you that. “The HRRR predicted four to six inches of rain centered over Broomfield [15 miles southeast of Boulder] in the period from 5 p.m. Wednesday night to 7 a.m. Thursday morning,” the project’s chief scientist, Alexander MacDonald, later told me. Instead, rainfall totals topped a foot in many areas.

More than 14 inches of rain in four days—falling in a semi-arid climate where annual average precipitation rarely surpasses 19 inches—would have been once unimaginable to many meteorologists. No longer.

Weather and climate, it bears repeating, are not the same thing. But climate can certainly have an impact on weather, and in the wake of a storm that no one saw coming or even believed could happen, a lot of people are asking whether climate change drove the deluge, and if it might happen again. The Intergovernmental Panel on Climate Change’s “fifth assessment” report is due out later this month. Parts of the paper have been leaked, and as with past assessments, it appears that the link between global warming and extreme weather events will be complicated. But climate change is still expected to make Colorado hotter and drier, which may, in fact, “translate into more frequent, sharp swings between drought and flood,” as Andrew Freedman explains at Climate Central. Another popular theory for how climate change contributes to extreme weather involves blocking patterns—broad areas of high and low atmospheric pressure that remain intransigent, keeping the same weather patterns in place for long periods of time. Climatologists blame the blocking patterns on a jet stream that’s out of whack due to ice melt and warming in the Arctic. A blocking pattern undoubtedly played a leading role in last week’s Colorado floods.

Whether they become more frequent or not, there’s at least some evidence that such storms aren’t as rare as we think. John Pitlick, a geology and hydrology professor at the University of Colorado, investigates how rapid snowmelt and intense precipitation behave in mountainous terrain. “I’ve been here 30 years,” he said, “and I’ve never seen rainfall even approaching these levels.” But the geologic record has him convinced that he might see them again. On Wednesday, I attended a seminar at which Pitlick drew a standing-room only audience (the flood, he jokes, has elevated him to “rock star” status). He told us that claims this was a 1,000-year flood are greatly exaggerated.

Launching into a PowerPoint presentation, Pitlick showed a monument on the banks of Boulder Creek. It’s a functional sculpture, an 18-foot-tall flood-level marker carved in stone to memorialize famed geologist Gilbert White, whom Pitlick calls “the founding father of floodplain management.” Steel bands on the obelisk mark the supposed 50-, 100-, and 500-year flood heights. The recent flood didn’t even come close to hitting the 50-year mark. What’s more, during the legendary Boulder Creek flood of 1894, flow rates hit 12,000 cubic feet per second, at least twice the maximum flow during last week’s so-called “Superflood.”

In the next few slides, Pitlick meticulously plotted the frequency and flow rates of Colorado’s historic floods, comparing the mean totals of water coursing through the canyons west of Boulder with peak levels reached during past major floods. Conclusion: the event last week was nowhere near millennial. The “return period”—the likelihood for a major flood to occur—was “between 25 and 50 years.”

The room was jammed with scientists—geologists, hydrologists, meteorologists. “If anyone has anything to add or thinks my figures are off, please interrupt me,” Pitlick offered. Silence.

How can Pitlick’s conclusions be so different from what has quickly become the prevailing wisdom on this storm? Meteorologists consider the numerous variables required to produce a particular weather event in the same way a statistician would calculate the chances for winning a Powerball lottery. And in that scenario, one in 1,000 makes sense. But the hydrological record soundly disagrees. What happened in Boulder happens a lot more often than we think.

Biblical or not, our home survived the storm intact. The worst damage was caused by a downspout off our roof, which drained too close to the house and created a pond next to an outside wall. The water eventually soaked into our stucco siding, cracking it, and flooded our herb garden. Initially I wasn’t going to fix the problem, which would entail a lot of ditch digging and installing a French drain—why bother, I thought, when I wouldn’t have to worry about another storm like this in my lifetime? But after Pitlick’s talk, I decided to make a quick stop at Home Depot and spend the afternoon swinging a pickaxe. Only I got rained out, as—an hour into my new drain project—thunder clapped and the skies above Boulder unleashed again.