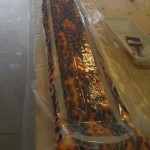 At some point during the production cycle of my article in Skiing magazine about building my own skis, there was a temporary headline slapped on the layout: “DIY Skis? Try WTF Skis?” Though the headline didn’t stick, it sums up the insanity of trying to build skis from scratch in my garage. But having done so, I have to admit that my home-built boards were close, very close to being a rideable pair. It turned out that I had made the wood cores too thick, and this left me with skis that were a bit herky-jerky on the hill. If I had to do it over, I’d go much thinner, less fiberglass, less wood, less epoxy … less of everything.

That said, I probably wouldn’t make skis again. I spent about $600 on materials. For that amount, I could nab a high-end pair of last-season’s sticks. But the fact that I made skis that were reasonably rideable without any prior experience says a lot about the quality of store-bought boards. Certainly you’d think the pros could do exponentially better than a DIY hacker like me? And yet most of the skis of I’ve owned over the years rode only marginally better on the slopes than my homemade jobs. That seems outrageous. Does this mean that all production skis are junk? No. Though figuring out which brands excel is tough, especially since many models—including some of the so-called “boutique” labels—use the same manufacturing facility in Slovenia. There you have it, my next story: The search for the world’s best-built ski.