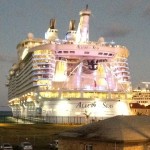 Allure of the Seas is a Brobdingnagian spectacle. It’s a ship in name only. No, it’s not a ship. It’s Vegas on floats. While reporting my story on cruise-ship sustainability for OnEarth magazine, I drove from Miami to Fort Lauderdale to visit Allure. But I spotted her when I was still miles west of Port Everglades, her homeport. I was inland, driving on I-95. Allure rose above Florida’s verdant flatlands like a snowy mesa. I boarded her (I realize that sounds kinky) through a terminal building coupled to her

port side like a conjoined twin. There are no gangplanks or anything resembling a conventional approach to a ship. Boarding Allure at Port Everglades involves no interaction with the Atlantic Ocean. You can’t see it or hear it or smell it. Water is abstract.

Jamie Sweeting, who heads up Royal Caribbean’s sustainability efforts, recalls his experience on Allure during her maiden voyage from Turku, Finland, across the North Atlantic, to Florida. Invited were mostly VIPs and executives from Royal Caribbean. At one point during the mid-ocean crossing, Sweeting told me that 100-foot swells (he guessed their size) began slamming broadside into Allure. While surf was crashing over her bow, Allure barely jostled. There was an ice-skating extravaganza underway on Allure’s centrally located rink (yes, there’s an ice rink amidships). The skaters apparently executed flawless pirouettes, oblivious to the raging seas on deck.

Another fun fact: Allure is actually a foot longer than her sister ship, Oasis of the Seas. Though they were built by STX Europe from the same set of plans, Allure was assembled during warmer months. This caused her steel to expand. Individual spans stretched less than a millimeter. But Allure is made from a lot of steel—about 55,000 tons, almost exactly what it took to erect the Empire State Building. Collectively, all that warm, expanding metal added 12 inches to the length of Allure, giving her the title of world’s largest.