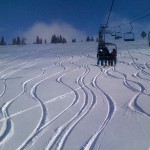 There are some perks that come with freelance journalism. Pay isn’t one of them. Powder is. I live in Colorado, less than two hours from Vail, where I buy my annual ski pass. Working from home, for myself, mostly on my own schedule, means I can be extraordinarily picky about the days I choose to ski. And picky I am. For me, it’s weekdays only, with a minimum of six inches of new snow overnight—and that’s after lifts close. I don’t like wind, crowds, or tracks. Freelance writing means skiing only epic days, and then making all your friends hate you by posting photos of the spoils to Facebook. Obnoxious? Perhaps. My profile of Joel Gratz in Outside introduces you to the man that has made this pickiness possible.

I won’t make the final decision to drive up to the high country until Joel posts his predawn update on OpenSnow. No snow; no go. Thanks, Joel, now nobody will ski with me anymore. Ever try calling a buddy a 5:05 AM and telling him to be ready to hit the road in 15 minutes? Then again, if you’re amenable, send me an email. I’ll carpool for gas money.

Before Joel, I stumbled through weather websites trying to determine if the big storms would pay off with big dumps. I rarely got it right. Confession: I tried to major in meteorology in college but couldn’t pass the required calculus courses—even after repeating them, twice, with the help of a tutor. So I gave up on that fantasy and decided to write about weather, and science in general, instead. My dream job—had I had a math brain—would have been a pilot and meteorologist for the Hurricane Hunters. Even so, I’m a decent amateur weather geek. And, mostly with Joel’s help, have improved my success rate for glorious powder days to near 100 percent. My self-imposed rule: “If I can hear the edges of my skis on the slopes, I don’t want to ski.” Yup, I’m picky. But the white stuff is worth it, especially while the rest of you are locked in your cubicles, drooling.