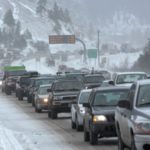 The interstate that feeds Colorado’s mountain recreation areas is dysfunctional, at least occasionally. Traffic flows smoothly most of the time. But every summer and winter weekend, gridlock invariably snarls I-70. You might wonder what has improved since I wrote about I-70 for 5280magazine in March 2017? Answer: nothing. In fact, the situation is worse when you consider that in the past year about 100,000 more people have moved intoColorado. State legislators attempted and failed to pass sweeping transportation taxes to fix the roads; voters rejected similar ballot measures. Nobody who drives in Colorado wants to pay for actually driving. The situation frustrated CDOT executive director Shailen Bhatt, who stepped down in October 2017 for a job in the private sector. Meanwhile, a bid to host the 2030 Winter Olympic Games in Colorado is making the rounds, a preposterous proposition unless the state magically finds the estimated $20billion needed to upgrade the roadway. Could Winter Games catalyze taxpayer support for an I-70 overhaul? I’m not betting on it.