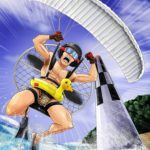 I wrote two features last year about variations on the sport of paragliding. In September 2017, for Air & Space magazine, I chronicled a maniacal cross-country paramotoring race over the American Southwest. Paramotoring pilots take to the air with lawn mower-like motors strapped to their backs and huge propellers spinning inches from their heads. Paramotoring engines are loud but useful: they keep pilots aloft when they’re flying over sketchy ground with nowhere to land. Paragliders are braver (or more foolish) because they rely solely on their keen piloting skills to stay airborne. In 5280’s December 2017 issue, I followed a paraglider who attempted to traverse Colorado’s Rocky Mountains. It didn’t work out so well. But he didn’t die, which in paragliding circles is a bonus. Having covered aerospace and aviation for nearly 20 years, I’ve determined that gravity works. I’ve also learned that our atmosphere is inherently chaotic and unpredictable, making it unwise to take flight harnessed beneath an oversized handkerchief. Aviators like to say, “There are old pilots and bold pilots. But there are no old, bold pilots.” Paramotorers and paragliders ought to heed a similar but appended adage: “There are no old pilots.”