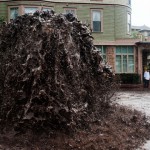 How do you create a crapocalypse?

Here’s how: Between September 10th and 15th, heavy rains engulfed Boulder, Colorado, where I live, dumping 16.4 inches on the People’s Republic. On September 12, the city set an all-time 24-hour rainfall record, at 9.08 inches. Boulder is situated in a semi-arid region that averages about 20 inches of rain annually, and yet we managed to tally up 80 percent of our yearly total in just five days. An udometer (a fancy term for rain gauge) near my home in South Boulder measured 21.13 inches—our entire year in less than a work-week!

Much of that water funneled into the numerous narrow canyons that flank the town’s west side, eventually blasting into the city, sweeping away people, cars, homes, supermarkets, roads, bridges, trees, and livestock. The floods also caused millions of gallons of raw sewage to spew, in some cases with geyser-like virility, from sinks, bathtubs, showers, and toilets.

On Sunday evening, as the deluge was finally waning, local ABC affiliate 7-News weatherdude Mike Nelson appeared downright baffled about where all the water was going to end up. I’ll tell you where some of it went, Mike. It went into the sewers, which maxed out quickly. When a closed fluid system that relies on gravity gets overloaded, it becomes pressurized. Suddenly, the poo needed an exit, and anyone with plumbing became its escape route.

Renee Williams and her husband, Brian Nelson, and their two kids, Jake and Stella, made The Los Angeles Times and The Denver Post because they were among the dozens whose homes were choked with crap. I first met Williams, who lives two blocks from me, while I was shooting video of the floodwaters raging past her front lawn. The next morning she called pleading for help—they had a full-blown sewage eruption underway. Her whole family is now staying in our guest room while Servpro demolishes their home, “like it never even happened.”

You could say things in Boulder have gone full biblical. Thanks to the floods, dozens of the native black-tailed prairie dogs that populate Boulder’s parks and grasslands have been flushed out of their burrows and have been seen wandering aimlessly. Dazed and confused, they are taking to the roadways, where they get flattened, immediately. Insects—bees, mosquitos, spiders, flies, moths, crickets—have become inexplicably agoraphobic. Open a door or window for a moment and they’ll gang-rush to get inside. Did you know Boulder had native crayfish? I didn’t until a friend posted a video on Facebook capturing legions of them doing a sidestep scamper along the South Boulder Creek trail, where I run once a week. Birds are gorging on the exposed crayfish, which, like the prairie dogs, seem hell-bent on committing mass suicide.

But was the flooding truly a one in 1,000-year event, as some are claiming? Not so much. First, the millennial categorization refers only to the odds that atmospheric conditions could have aligned in a way to produce a storm of such magnitude. Those conditions included a supersaturated atmosphere—the most water vapor ever measured in September here—fed by residual moisture from weakening tropical storms in the Gulf of Mexico and Pacific Ocean. Another critical component: easterly, or “upslope” winds, which slammed all that moisture against the Rocky Mountains, where it had nowhere to go but up. Because colder, denser air at high altitudes cannot hold as much water as warm air lower down, the vapor condensed into rain.

Finally, there was the blocking high—the linchpin. The Jet Stream carries weather from west to east across Colorado like a runaway freight train. That means fronts normally last eight, maybe 12 hours, and don’t impact large geographical areas. Lately, however, the Jet Stream has been crawling rather than sprinting across the Northern Hemisphere. Many climatologists attribute this to a warming and melting Arctic. Recent studies have shown that when the Arctic heats up and dries out, the Jet Stream gets “wavier,” which primes the atmosphere for producing “blocking highs.” And that’s the prevailing theory behind the Boulder Floods: A massive blocking high prevented waterlogged air from hustling east. Instead it got pinned between the Great Plains and the Front Range—directly over Boulder—where it was wrung out like a wet sponge in a bench vice.

Joel Gratz, a Boulder meteorologist I wrote about for Outside in July, put it this way, “The atmosphere was in outlier mode, like a rogue wave in the ocean. It feels insane to us because we’ve never seen anything like it, and it’s a very tiny statistical probability that it can happen, but it does happen.”

Hydrologists see things differently than meteorologists. John Pitlick, a geologist and hydrologist at the University of Colorado who has spent decades investigating Front Range floods, painstakingly plotted the average flow rates of numerous streams, creeks, and rivers around Boulder, with data going back nearly a half-century. He compared those rates with historic floods over the same timespan.

Recently, Professor Pitlick held an impromptu one-hour PowerPoint lecture to share his findings with a group of scientists, students, and journalists who’d packed into a small classroom at the University of Colorado’s Leeds School of Business. I was there, too. His conclusion? Expect a similarly sized flood to return to Boulder in 20 to 50 years—though it may take the form of a more intense event, over a smaller area. It’s notable that rainfall rates of the recent flood weren’t record-setting. During the famed 1976 Big Thompson Flood, rain fell at up to eight inches per hour. Peaks last week in Boulder only hit a maximum one-inch per hour (though it persisted much longer than the four-hour rain that triggered the Thompson event). The takeaway is that Mother Nature didn’t come anywhere close to demonstrating her full, unbridled fury.

But she will, believes Pitlick, and we won’t have to wait as nearly long as we thought to witness it. Assuming Pitlick’s historic flood figures are accurate (he asked the audience to fact-check him and nobody spoke up), and this truly was a mere 20- or 30-year storm, then the impact—18,000 homes damaged and nearly 2,000 destroyed; eight people dead—will be paltry compared to the Big One that is still out there, en route. Anyone who lives in the flood plain will be toast, regardless of how the City of Boulder decides to beef up mitigation.

Several scientists who study climate change, extreme weather, and floods took part in a panel discussion at the University of Colorado’s Cooperative Institute for Research in the Environmental Sciences this week. The consensus was that it was too early to determine the so-called “return frequency” of this event—more research is needed—but they felt that the “hundred-year” likelihood was exceedingly generous.

If nothing else, Boulder should probably revamp its sewer network very soon because next time, whenever that is, it may well be far worse than just a few soiled neighborhoods. And a city submerged in shit is going to be unimaginably more challenging to clean up than one bathed in rainwater. Upgrades will cost millions of dollars. But, hey, the city could easily pay for them with all the revenues it’ll reap from the proposed 30 percent tax slapped on now-legal recreational pot sales—though only if locals refrain from handing out free joints, like they did on Pearl Street recently, for “stressed out residents who lost their stash in the flood.” Then again, that may make the next crapocalypse easier to deal with, too.